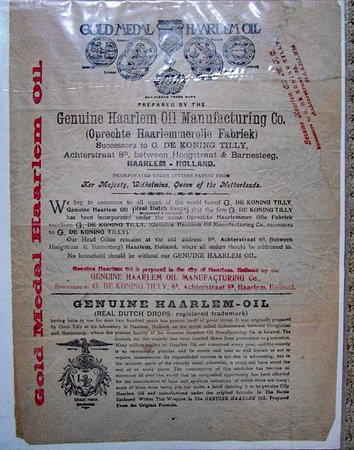 1906. Large single sheet broadside, 340 x 250mm; printed on both sides in red and black, with engraved vignettes; central horizontal fold evident; paper lightly browned with some occasional foxing, paper quite prominently creased; a couple of minor marginal tears, but otherwise good. A 20th century medical broadside - in fact the bottle wrapper according to the text - promoting the benefits of Genuine Haarlem Oil (real Dutch drops) and attesting to its authenticity. Originally prepared by Claas Tilly in his laboratory ‘the formula for this remedy has been handed down from generation to generation’ and soon gained a reputation as a cure for kidney and bladder complaints. According to the present day Haarlem Oil web site he was assisted by Hermann Boerhave in the production of the remedy, who though sharing the profits of the medicine and recommending its use, was prevented from associating his name with a commercial proprietary product through the ethics of his profession. ‘The ingredients follow a process that take several days, in which the particular chemical preparation and difficult analysis has permitted the Tilly Family to preserve the secret of the production during 200 years’ (present day web site).
It proved so popular, that it was inevitable that a number of imitations were produced, with many claiming to be the genuine Tilly Haarlem Oil. At some point in the early 20th century the company gained an American backer, and in around 1906 the Dutch government granted a charter to the company which was given the right to use the word "genuine" and the words "Oudste Fabriek" (oldest factory) on its product, a privilege which was not been granted to any other concern or individual making or handling Haarlem Oil. The American connection meant that the remedy had to conform with the requirements of the United States Food and Drugs Act of 1906. The present broadside attests to this, and notes that from hereon their bottles will have blown on to them the words ‘G. de Konig Tilly’. Indeed in 1911 the Federal Government prosecuted the The Holland Medicine Co, of Scranton, Pennsylvania for falsely selling Gold Medal Genuine Tilly Haarlem Oil Capsules, For kidney, liver and bladder. Other issues located at the Library Company of Philadelphia (more than one issue), Harvard, Princeton, possibly at the Wellcome and the National Library of Scotland