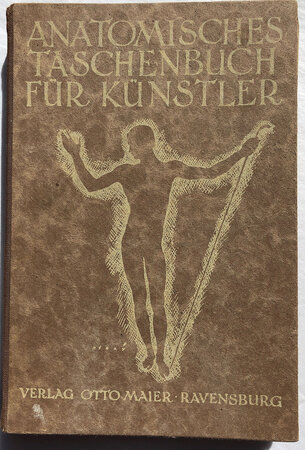 1941. 8vo, pp. 106, [6] publisher's advertisements; with text illustrations; together with a leporello containing 40 anatomical images in red and black and half tone with accompanying text; text volume a little browned around margins due to paper quality, outer margins of leporello very lightly browned, with some minor edge furling to first page; A 1941 fifth edition of this extremely popular and successful pocket instruction to anatomy for artists, particularly striking for presenting the 40 anatomical images as a folding leporello. Röhrl suggests that the work was first published in 1923, with several issues appearing during the late 1930s, and a sixth edition also being published in 1941.