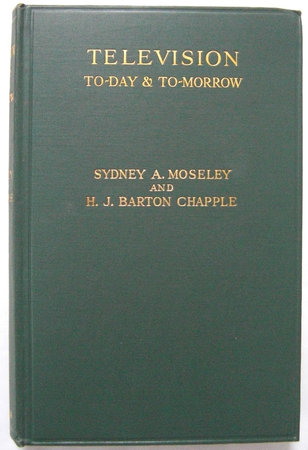 1930. 8vo, pp. xxiii, [i] blank, 130, 24 publisher’s advertisements; with 47 half-tone illustrations on 46 leaves, and 38 text illustrations; some minor marginal browning and occasional light soiling; with a number of neat marginal annotations in pencil throughout, in Swedish; with facsimile signature of John L. Baird; First edition of this important work, aimed at the general reader and amateur constructor, and one of the earliest works on television. Sydney Moseley was Baird's business manager and a tireless enthusiast for his work, and the present manual provides an detailed account of his work and system. His self-appointed champion and biographer, Moseley gives a strong defence of Baird and an extended account of the battle with the BBC Additional technical information is provided by H.J. Barton Chapple. ‘I started out to write a piquant history of television as I knew it at first hand, but the subject has grown out of hand. I found history was being made even as I wrote’ (p.xxii).