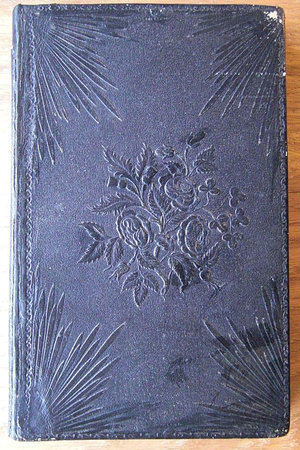 ATTRACTIVELY BOUND MANUSCRIPT ON CARTOMANCY Written in a single hand, untitled, but with the ownership signature of R. Sattersale, Blackburn Mile,

1838. Manuscript written in a single hand, in an un-ruled 8vo notebook of different coloured paper; ff. 52; pp. [8]; ff. [38] blank; first section written in landscape across the page; some occasional light foxing and marginal finger soiling; A personal album of cartomancy, written in a neat hand on multicoloured paper, and bound in a most attractive binding, by Joseph Dobson. Belonging to one ‘R. Sattersale’ of Blackburn, Lancashire, a check of the 1841 census reveals a number of Lancashire Sattersale’s - but we believe the volume may well have belong to one Rose Sattersale. Ms. Sattersale uses the most popular form of fortune-telling and card reading i.e. by using a set of standard playing cards. The author diverts, however, from more common interpretations of the cards, and has instead penned a series of light-hearted verses as answers, suggesting that this was for personal amusement amongst friends. Thus for the Seven of spades we read: ‘There are some that will speak very fare to your face, But would gladly behold you invok’d in disgrace. They call you inconstant, unkind and perverse, Forgetting that they are all this and much worse’ (p.30). Whilst for the Seven of clubs: ‘A great entertainment your presence will grace, At a very large house in a very gay place, But had you not gone you will say on the morrow, You’d been saved many hours of vexation and sorrow’ (p.1). The second section, written more regularly in portrait (as opposed to the first section penned in landscape), appears slightly more serious in tone. A series of 44 readings are given (numbered 1st-44th), providing such predictions as ‘Many things will be said to your disadvantage but you will have a warm advocate and steady friend in a gentleman you think little of’ (7th). Or this: ‘You will soon have a new relative introduced to you. I do not pretend to say agreeable, on the contrary’ (13th). The volume ends on a more positive note: ‘Your amiable disposition has gained the love of many’. Ramsden, London Bookbinders, and Packer, Bookbinders of Victorian London, both note a Joseph Dobson working in London between 1838-1840.

Condition: uncut, in a most attractively blindstamped black cloth, stamped with the name Dobson along upper edge, with the word ‘Album’ in gilt on spine, top edge gilt, head of spine neatly repaired, extremities lightly rubbed and bumped.