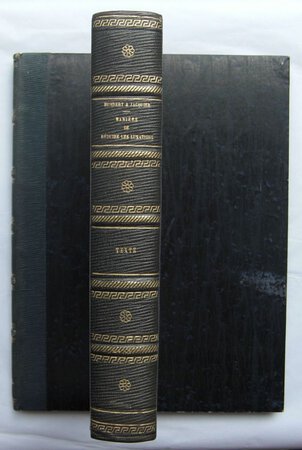 1835. Two volumes, 8vo text and large 4to atlas; pp. xiii, viii, 554; pp. [viii], and 30 lithographed plates (4 anatomical and 26 of apparatus, the latter accompanied by 15 leaves of explanation); some minor spotting to text with occasional marginal dampstaining, atlas volume a little foxed and browned; in modern quarter blue straight-grained morocco, preserving the original printed wrappers to the text bound in, spines in compartments ruled and lettered in gilt, spines a little sunned, extremities lightly rubbed and bumped, minor wear to boards; a very good copy. Rare first edition. Humbert was the first to make any progress on a problem unsolved since antiquity — reduction of a dislocation of the hip. Taking advantage of the latest information on the anatomy of the hip presented by Dupuytren and Vrolik, Humbert developed manipulative techniques which he claimed succeeded in reducing both congenital and pathological dislocations in brief sessions. While successors such as Pravaz and Gerdy considered that he achieved a transposition and not a true reduction, both acknowledged that his innovative work was the impetus to the successful reductions achieved by Pravaz in the 1840s. “Humbert was one of the first who tried to correct congenital dislocations of the hip without operation. His book on this procedure (published together with Jacquier) and his other works are adorned with excellent, precisely detailed construction drawings of the apparatus invented by him...” (Valentin, Geschichte der Orthopädie, 120–121 and 205–206, in translation).
This rare book is unusual and elegant both in its typography and illustration. Four of the plates illustrate the hip, and the remainder show precise details of the apparatus that Humbert and Jacquier devised. Humbert, who described himself as a “médecin-orthopédiste” opened one of the first orthopaedic establishments in France, preceded only by Delpech. Humbert founded the first orthopaedic hospital in France in 1817, and invented extension beds and chairs, and an instrument to measure changes produced by spinal curvatures.