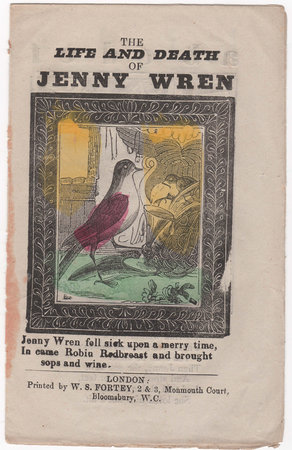 1860. 8vo, pp, [8], with eight woodcut illustrations, four of which have been crudely hand-coloured, and with running alphabet at the head of six pages; generally clean and crisp; An appealing and scarce chapbook, reprinting the popular tale of Jenny Wren, and issued by the noted firm of W.S. Fortey. The McGill copy has the same illustrations hand-coloured in the same style.
During the 19th century the printing industry became much more technologically advanced, resulting in a major increase in the speed and output per printing press, and a consequent reduction in the cost of printing. Literacy had greatly improved through all sections of society, and the demand for cheap newspapers, journals and novels was unparalleled at any point in British history. Printers such as WS Fortey embraced new technology such as steam printing, and were very active as the printers of cheap chapbooks, posters, leaflets and trade cards. OCLC locates copies at McGill, Pittsburgh, Cambridge and Monash, with further digitalised copies located.