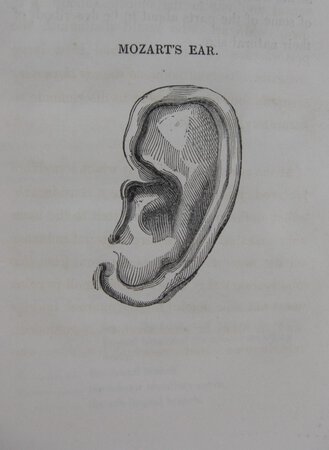 < >
By the first British patent holder for a hearing aid
WEBSTER, Alphonso William.

A NEW AND FAMILIAR TREATISE ON THE STRUCTURE OF THE EAR, and on deafness. London: Published by the Author, at 102, New Bond Street; and sold by Messrs. Simpkin and Marshall, Stationers’ Court; and all booksellers. 1836.

1836. 8vo, pp. viii, 151, [1] advertisement, [2] blank, [4] testimonials; with wood-engraved illustrations; some occasional light foxing and soiling, otherwise clean and fresh; with the book-plate of Lord Fitzhardinge, Berkeley Castle, on front paste-down; in the original drab boards, with mounted printed label on upper cover (a little scuffed and abraded with loss of a couple of letters), paper label on spine, chipped with small piece missing, 2cm loss of spine at tail, upper joint cracked at head, covers rather foxed and soiled, extremities bumped and lightly worn; a presentation copy from the author with inscription on title ‘The Right Honble Lord Segrave with the Author’s respectful Compts’ First edition, presentation copy. Webster describes himself on the title-page as the “inventor of the Otaphone”, and indeed Webster was granted the first British patent for a hearing aid on March 17th 1836, the present work therefore doing much to promote his newly invented device. ‘The invention was first suggested by observing person at church, and other large assemblies, supporting the ear with the hand; which induced the author to consider whether the same advantage might not be obtained by means less troublesome and unsightly. His own experiences, and subsequent experiments in which he was assisted by his friends, soon convinced him of the correctness of his induction's; since which the Otaphones have been worn in both Houses of Parliament, on the Bench in the three divisions of the Empire, at places of Public Worship, the Theatres, and every public arena’ (p. 131-2). An example of the Otaphone can be found at the Becker Medical Library, as part of the Central Institute for the Deaf - Max A. Goldstein Historical Devices for Hearing Collection. It was constructed of pure silver, and painted beige to match the skin of the wearer. It was shaped into a curve to be placed in the back of the ear. A small hook secures the device. The design allowed the auricle (external part of the ear) to be projected forward to collect sound waves, much as if the wearer was cupping the ear.
“The principal object which Mr. Webster seems to have contemplated by the publication of this treatise, is to afford useful and correct information regarding the ear to the general reader, especially to the deaf. This, we think, he has succeeded in doing; for, while his explanations of technical terms are such as any one may understand, he has adopted a scheme of distribution as regards the different parts of the ear, and their appropriate functions, that greatly tends to elucidate the subject. The author has made the particular organ in question the subject of long, and enlightened study; and from the success which has attended the application of the ‘Otaphone’ to the auricle, it may be added, that this study has been remarkably successful as regards its practical results.” (Monthly Review). One section is devoted to the musical ear in general, and to Mozart’s in particular, and is accompanied by an illustration of Mozart’s ear. In common with the Bodleian copy (and presumably all others), a space left for an illustration on p. 110 has been unfilled.