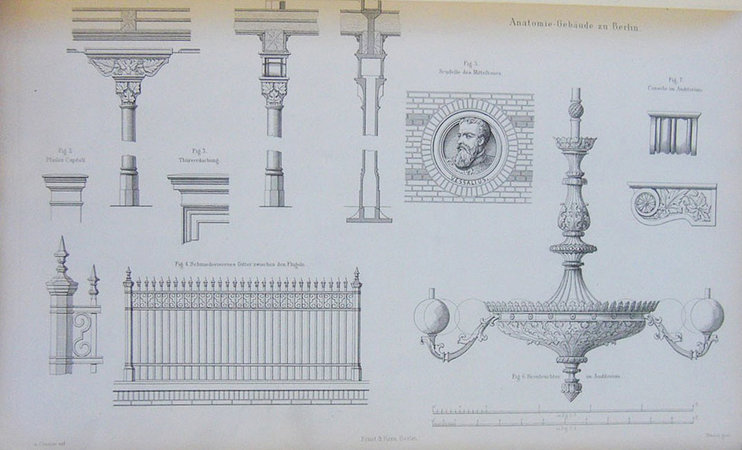 1866. Small folio, pp. [ii], 4 with ten engraved plates and plans (one double-page); some occasional minor marginal dust-soiling, and some light foxing; First separate edition of this attractively illustrated architectural account of the design and construction of the new anatomical Institute at the Friedrich-Wilhelms-Universität, Berlin, by the noted German architect Friedrich Albert Cremer (1824-1891). The engraved plates include depiction’s of some of the finer details of the building, including some of the ornate light fittings, and even the water closets, with plans of the proposed grounds also included.
Cremer, the son of the builder Johann Peter Cremer (1785-1853), studied architecture at the Berlin Academy in 1846. After some time spent in the Prussian Army as a hydraulics engineer, he returned to Berlin in 1859 and was appointed as a building Inspector. His first major architectural project, together with Carl Johann Christian Zimmermann (1831-1911), was an expansion to the Berlin debt prison to create a women’s prison. This was followed by his two most famous commissions for the Friedrich-Wilhelms-Universität: designing both a new Anatomical Institute building as discussed here, and under the guidance of the new director of Chemistry August Wilhelm von Hofmann, a new purpose-built chemistry laboratory, about which Cremer also published a similar account in 1868, Das neue chemische laboratorium zu Berlin.
The present account was also published in Zeitschrift für Bauwesen 16/1866 and 17/1867. OCLC locates copies at Cornell, the New York Public Library, the NLM, Glasgow, the Victoria and Albert Museum and the British Library.