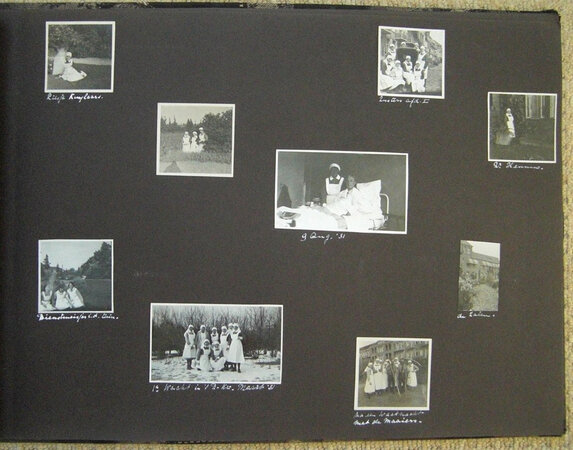 LARGE OBLONG ALBUM CONTAINING 111 PHOTOGRAPHS of varying sizes, seemingly taken by a nurse and recording her time at the St. Elisabeth Gasthuis, Haarlem

1924-1931. Large oblong album 36 x 51 cms; ff. 10 leaves of black card mounts, of which 7 have been used, and including 111 photographs of varying sizes, some in sepia, 11 of which are commercial images of Haarlem, and the two largest images loosely inserted at the end; one of two images with slight creasing and edge wear, though all crisp images, and each with a neat hand-written caption below in white pencil; bound in an attractive decorative silk covered album in a cubist style, retaining the original silk ties, head and tail of spine a little worn with some minor loss and fraying, with faint dampstaining visible on covers, and further light fraying and wear to extremities and corners; a most striking item. A most striking album recording the experiences of a nurse working at the St. Elisabeth Hospital (‘Gasthuis’) for the poor in Haarlem between 1924-1931.
The hospital was officially founded in 1581 when the Protestant city council took over the running of a hospice previously run by the Franciscan monastery. Its purpose was to provide care for the sick poor of the city who did not required isolation, and it remained in operation until WWII, going through several major renovations over the centuries.
This meticulously and attractive album provides a wonderful insight into this famous hospital, which thanks to a number of commissions to local artists over the centuries, for many years owned an imposing art collection, including works by Frans Hals, Jan Cornelisz Verspronck and Frans Decker. In 2012 eleven works were formally signed over to the Frans Hals Museum, which already held a number of items on loan. Nearly 40 of the photographs included in the album depict the nurses either at work, or else relaxing in groups, with thirteen of the images recording some of the patients, a number of whom appear to be suffering from mental illness. All aspects of life in the hospital are depicted, the compiler including images of porters, the laundry staff, life in the kitchens as well as a group of ‘kuipers’ or ‘coopers’ who may well be patients who were well enough to work. A whole page is devoted to a series of commercial images of famous sights and buildings in Haarlem itself, with a number of shots showing the nurses enjoying the surrounding countryside. A most appealing item.