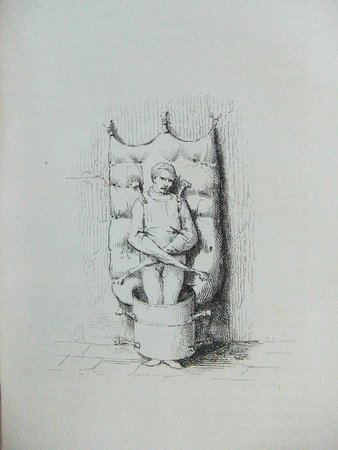 < >
A medical fact-finding tour of Italy and Switzerland - including a depiction of a restrained patient in an asylum
GUISLAIN, Joseph.

1840. 8vo, pp. ii, 343, [i], errata; with 32 lithographs on 31 leaves, two folding; faint dampstain affecting the upper margins of each of the plates, though predominantly unobtrusive and never touching image; text clean and crisp; with library stamps on recto and verso of title-page, and library label on front paste down; in contemporary marbled boards, spine in black with red paper label lettered in gilt, label very slightly nicked, head and tail of spine, and upper joint a little rubbed and worn, corners a little worn; a good copy. First edition of this attractively illustrated travel account of the journey made by Dr. Joseph Guislain in 1838 through Italy and Switzerland, effectively a medical fact-finding tour. Written as a series of letters addressed to his fellow members of the Society of Medicine of Gand, the work is divided into two parts, the first parts dealing with ‘la constitution morbide de l'Italie’, ‘les conditions morales de l'Italie’ as well as ‘les travaux médicaux en Italie’. In the second part, Guislain describes in more detail ‘les hôpitaux, établissements de charité et institutions scientifiques de l'Italie’ which he had visited in Turin, Genoua, Pisa, Florence, Sienna, Naples, Rome, Venice, Milano, Lausanne, Berne and Zurich. The work is attractively illustrated with a number of lithographs, which depict a number of hospital façades, plans, architectural details, instruments, and even methods of treatment, including a striking image of a mentally ill patient horizontally restrained and strapped to a mattress.