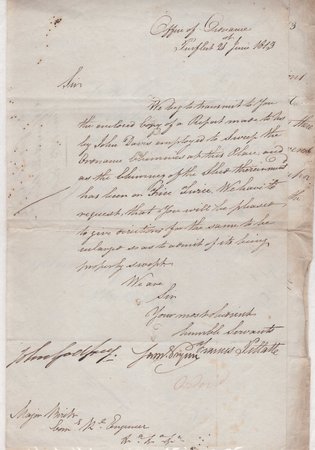 TWO HAND-WRITTEN DOCUMENTS one being a letter of instruction, and the other a copy of the chimney sweep’s report, requesting that a chimney at the Office of Ordnance, Purfleet be enlarged to allow for sweeping and prevent further fires. Purfleet, June 16th and June 21st

1813. Two single manuscript letters on watermarked paper, neatly written in brown ink in two separate hands, and with further additional signatures; paper little browned and dust-soiled, with some minor ink spotting, and each sheet with two or three small paper flaws. Two nice early 19th century documents relating to chimney sweeping. The first, dated Purfleet June 16th, 1813, is a copy of a report by John Davies and addressed to Captain Godfrey Esq, Storekeeper. ‘Gentlemen, You will give directions for the chimney shaft attached to Taylors shed to be enlarged as there is a check by the roof so as to prevent the Boy or a wiff of straw to go up or down which was the occasion the chimney being on fire’. The accompanying letter of instruction dated ‘Office of Ordnance, Purfleet 21st June 1813’, is addressed to Major Birch ‘Coms. Rl. Engineer’. ‘Sir, We beg to transmit to you the enclosed copy of a report made to us by John Davies employed to Sweep the Ordnance Chimnies at this place, and as the chimney of the shed therein mentioned has been on fire twice, we have to request that you will be pleased to give directions for the same to be enlarged as as to admit of its being properly swept’. This has been signed by John Godfrey, Sam[uel] Prynn and Francis Pallatte. Prynn was Clerk of the Survey, and Pellate Clerk of the Cheque. As one of the gunpowder magazines of the Office of Ordnance, the prevention of fire at Purfleet must surely have been a matter of some urgency!