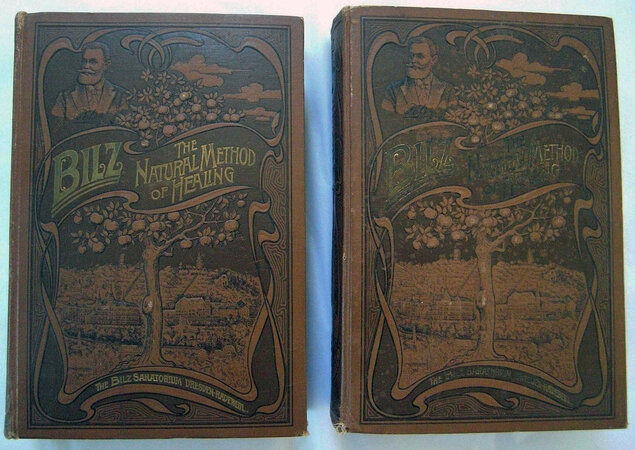 THE NATURAL METHOD OF HEALING. A new and complete guide to Health by F. E. Bilz. Founder and Proprietor of the Bilz Sanatorium at Radebeul, Dresden, Germany. Translated from the latest German Edition. Upwards of 850,000 copies sold. With a portrait of the author and more than 700 illustrations, numerous coloured plates and several coloured folding models of the human body and its organs. All rights reserved. F. E. Bilz. Leipzig - London - Paris. [n.d. but ca. 1900].

1901. Two volumes, large 8vo; pp. [iv], 736, [ii], 737-1050; [ii], 1051-1653, [3] blank, [ii] part title-page ‘Modes of Treatment’, [1657]-1760, [ii],1761-1776, [ii], 1777-1840, [ii], 1841-2074; with folding male mannikin with flaps together with accompanying folding explanatory leaf at front of Vol I, and folding female mannikin with flaps together with explanatory leaf in Vol II, folding leaf at rear of Vol I containing 7 illustrations with flaps on the anatomy of the nose, ear, eye, larynx, lungs, heart, and head, with folding frontispiece ’Distinguished exponents and protectors of the Natural Healing Method’, double-page chromolithograph showing Bilz’ Sanatorium embellised in gilt, and sepia lithograph portrait of the author, and with a further 30 chromolithograph plates (one double-page), and copious text illustrations; double-page frontispiece somewhat browned with long vertical tape repair, and chipping to outer edge, portrait and first few leaves of Vol II also with edgewear and chipping; printed on rather poor paper quality thus browned and somewhat foxed and soiled throughout, with some marginal browning to the plates; with later signature dated 1905 on half-titles; A later English edition, testimony to its enduring popularity, of Bilz’ ‘Das neue Naturheilverfahren’ (first English 1898), and which was eventually translated into 12 languages. A striking piece of late Victorian bookmaking, and illustrative of the rise in popular medical publishing, the work is copiously illustrated including a number of ‘flap’ illustrations, together with chromolithographs depicting everything from poisonous mushrooms and medicinal herbs to gymnastics and swimming. Though in the present copy repaired, the set also includes the striking double-page chromolithograph depiction of Bilz’ Sanatorium, seemingly not always present, together with an interesting folding plate highlighting a number of leading exponents of the ‘Natural Method of Healing’. The second volume includes quite detailed discussions of the facilities available at the Sanatorium. A note has been added at the bottom of the depiction of the Sanatorium stating ‘High award at the Jubilee Exhibition, Vienna, 1898’.

Condition: in the original decorative brown publishers cloth, embossed and stamped in black and gilt, though rather faded, head and tail of spines and extremities lightly rubbed and worn, some cockling.