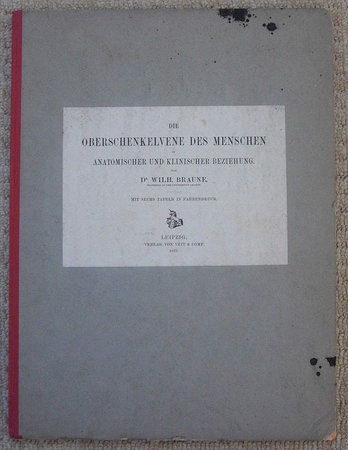 1871. Small folio, pp. vi, [2], 28; with six partially hand-coloured lithograph plates; some foxing throughout, more prominent in early leaves, with some staining and foxing to plates; in contemporary red cloth backed grey boards, with paper printed label on upper cover, covers a little scuffed and soiled with quite prominent ink stain affecting top margin of upper cover, and smaller mark at the lower fore-edge, extremities and corners lightly bumped and worn; a good copy. Uncommon first edition of this finely illustrated anatomical treatise on the femoral vein, by the noted German anatomist Wilhelm Braune (1831–1892), published just a year before his groundbreaking and iconic ‘Topographische-anatomischer Atlas’ (1872), famous for its use of frozen sections.
Braune studied at the universities of Göttingen and Würzburg, and in 1872, became professor of topographical anatomy at the University of Leipzig. His works are renowned for his excellent use of lithography to depict the anatomy of the human body, of which this is a striking and early example. A second edition was published in 1873, together with a companion volume ‘Die Venen der menschlichen Hand’, and which are sometimes found together. These preliminary works and studies eventually culminated in his publication of ‘Das venensystem des menschlichen körpers’ (1884-1889), and which GM remarks was also ‘notable for its excellent illustrations’.