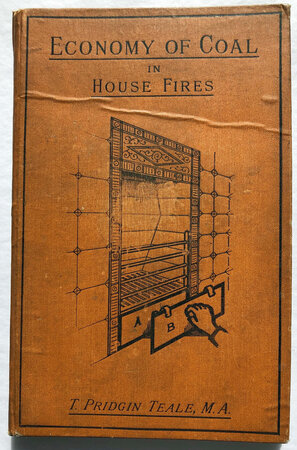 ECONOMY OF COAL IN HOUSE FIRES. or How to convert an ordinary fire-grate into a slow combustion stove at a small cost. Illustrated. Price, Two shillings and sixpence. London: J. & A. Churchill, New Burlington Street. Charles Goodall, Cookridge Street, and Boar Lane, Leeds.

1883. 8vo, pp. 47, [1] blank, [2] publisher’s advertisement and blank, including 10 full page plates (some partially coloured in red); some occasional light foxing and marginal browning, with neat repair to gutter of p. 33; with contemporary newspaper review pasted on to front paste down, and contemporary manuscript note giving an ‘epitome of a paper given by Teale’; in the original burnt sienna publisher’s cloth, neatly recased, upper cover ruled and decorated in black, head and tail of spine a little rubbed, spine and upper cover somewhat soiled and darkened, a good copy. First edition of this instructive work by the noted surgeon to the General Infirmary at Leeds, and renowned domestic sanitarian Thomas Pridgin Teale, junior (1831 - 1923). According to the preface, Economy of Coal is an expansion of ‘a lecture delivered on November 22nd, 1882, before the Leeds Philosophical and Literary Society’ and was published ‘in the hope that it may contribute to the diminution of soot and smoke throughout the Kingdom, and so further one great aim of the sanitary reformers, the improvement of the atmosphere of towns; that it may effect a large reduction in the amount of cinders and ashes, and so lessen municipal rates; that it may enhance the comfort of the sick room by rendering a fire more free from noise and dust and more lasting; and that it may induce many persons, including the delicate, the invalid, and the hard worked family doctor, to look upon a fire in the bedroom, not as a superfluous extravagance, but as a much needed comfort, nay, as a profitable investment towards the maintenance of health’ (Preface).
Teale describes his new device for controlling the draft of a fireplace from below, the “Economiser” in full, showing how effective it is in contrast to ordinary fireplaces, which he illustrates with graphic captions. It soon became standard and was known as the “Teale Grate”, and was ‘the result of several years' experience and of a number of experiments to determine the best means of obtaining an open fireplace with slow combustion and a maximum of heating power. It abolished the old iron grate, placed high up in the fireplace, with black bars for winter and polished steel bars for summer use. The idea, however, was not wholly new, as Teale discovered to his great delight one day when, visiting Hatfield House, he found the principles he advocated were embodied there in grates of the sixteenth century’ (Plarrs Lives Online - Royal College of Surgeons).
By 1890, the Teale Fireplace Company had been established in Woodhouse Lane, Leeds, with works in Kelsall Street, run by Lionel Teale, presumably the son of the inventor, and Richard Somers. It manufactured every kind of heating apparatus.