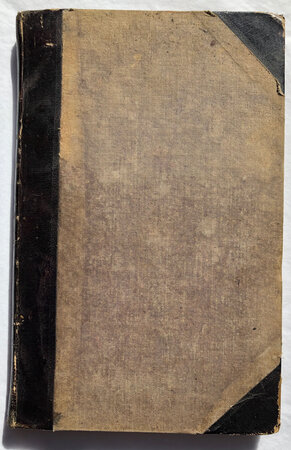 NOTES ON BUILDING AND ROAD-MAKING with rules for estimating repairs to tanks and channels: compiled for the use of overseers in the Department of Public Works. Fifth edition. Madras,

1862. 8vo, pp. 162, [iii] index, [3] blank; with 35 lithograph plates and one large folding frontispiece plan, plates interleaved with a blank leaf; general clean and fresh, paper a little more browned from p. 126 onward seemingly due to varying paper stock; with small Madras booksellers stamp at tail of title-page; one of two of the plates rather weak impressions with slightly faint text; Fifth edition (first 1852?), of this detailed and well illustrated manual of civil engineering, providing a fascinating insight into the organisation and maintenance of public infrastructure projects in British Colonial India.
According to the preface, the present work is a compilation drawn from a number of sources including ‘“Jackson’s surveying,” “Simms on Mathematical Instruments,” “Millington’s Civil Engineering,” “Mahan’s Civil Engineering,” and “Gillespie on Roads.” The accounts of brick making and tile making as practised at Mercara were kindly furnished to the compiler. The rules for the repairs of Tanks and Channels were drawn up some years ago by the late Captain Best, and a few copies distributed, but they were never printed till they appeared in the first edition of this book. Some memoranda of the same officer have been inserted in the chapters on bridges and roads. The tables of Indian weights and measures and the fall of rain at Madras have been taken from the Madras New Almanac ... Though containing many extracts from other books, yet there will be found here much matter, relating to building processes peculiar to the country, which has not before been printed’ (preface). The number of plates included in the present edition has apparently also been increased.
The work is divided into eight chapters and an appendix, and deal in turn with surveying and levelling; materials used in building; masonry; foundations; roofs; bridges; roads; and works of irrigation. The appendix provides additional information on such matters as tables of rates of earth works; tables of cart hire; weights and measures; price list of labour, materials and work; and a glossary of Indian revenue and irrigation terms. All editions appear scarce: we have so far been unable to trace a copy of the first edition; second edition of 1852 at Michigan, UC Davis, Texas and the National Library of Scotland; present edition located at the British Library only which also hold copies of the 1855, 1856 an 1875 editions.

Condition: in contemporary half black morocco over cloth boards, spine ruled and lettered in gilt, head and tail of spine a little knocked and rubbed, covers a little faded, light rubbing to joints and extremities, corners a little worn; a good copy.