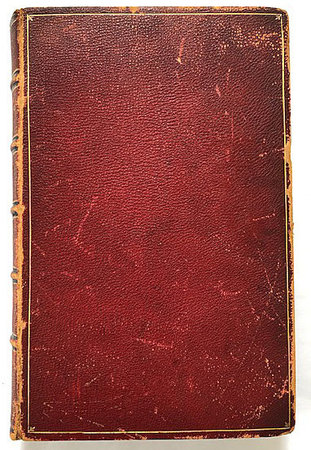 CHEMICAL ARITHMETIC Part I. [All published]. A Collection of tables, mathematical, chemical, and physical, for the use of chemists and others. Glasgow: William Hodge & Co., 26 Bothwell Street. 1890.

1890. 8vo, pp. xvi, [xiv] series of atomic weight tables, 68, [48] blank pages of which five have been filled in, in neat manuscript, 69 - 175, [1] advertisement, [4] blank; with some further neat manuscript annotations, and small typed addendum by a later owner adhered at tail of p. 73; one section with tabbed outer margins; somewhat browned and soiled in places, lower outer corner of preliminary leaves gnawed and missing; Uncommon first edition, and a nice association copy, of this practical work for chemists, by the renowned German chemical analyst Prof William Dittmar FRS FRSE LLD (1833-1892). As he notes in the preface, Dittmar intended the work to be viewed as a new edition of his ‘Tables to facilitate Chemical Calculations’ (1884). His proposed second part ‘an exposition of the applications of arithmetic to the solution of chemical problems’, was never published.
Born in Umstadt in Germany, Dittmar originally qualified in pharmacy, but in 1857 went to work in Bunsen’s laboratory at Heidelberg. There he met Henry Roscoe, who invited him to England, and when Roscoe became professor of chemistry at Owens College, Manchester, Dittmar accompanied him as his assistant. From 1861 to 1869 he was chief assistant in the chemical laboratory at Edinburgh University. After spending the next three years in Germany, where he lectured in meteorology at an agricultural college near Bonn, Dittmar returned to Edinburgh in 1872. In 1873 he was appointed assistant lecturer at Owens College - and was a contemporary of William Stanley Jevons - but the year after he became professor of chemistry at Anderson’s College, Glasgow, where he remained until his death. He is probably best remembered for his work of 1884, “Report on Researches Into the Composition of Ocean-Water”, the result of six years’ work on the H.M.S. Challenger samples. He was the first to confirm the Principle of Constant Proportions, a theory first conjectured in 1865 by Johan Georg Forchhammer regarding the major ions of sea-water: that whilst salinity varied across the oceans, the ratios of ionic abundance remained constant. As a result the Principle is often called "Dittmar's Principle" or "Forchhammer's Principle". Other work included research on the atomic weight of platinum and on the gravimetric composition of water, for which he was awarded the Graham Medal of the Glasgow Philosophical Society. He was elected a fellow of the Royal Society of Edinburgh in 1863 and of the Royal Society in 1882.
The present volume bears the signature of the noted American pioneer of radiochemistry, Betram B. Boltwood. Indeed he appears to have had the copy especially bound, with a large additional section of blank leaves added for notes, together with a number of card tables of the ‘Internationale Atomgewichte’ tipped in (for 1902, 1906, 1907, and 1908). A number of manuscript notes are found in the work, presumably in Boltwood’s hand. Boltwood established that lead was the final decay product of uranium, noted that the lead-uranium ratio was greater in older rocks and, acting on a suggestion by Ernest Rutherford, was the first to measure the age of rocks by the decay of uranium to lead, in 1907.
The volume subsequently passed into the hands of the noted physicist, historian of science, and UCSB professor emeritus Lawrence Badash. Badash specialized in the history of physics and specifically in the study of nuclear weapons. His early writing focused on the career of Rutherford, and indeed he wrote an article in 1986 “Rutherford, Boltwood, and the Age of the Earth: The Origin of Radioactive Dating Techniques” - no doubt drawing upon the present work for some inspiration.

Condition: in later full red roan calf, spine in compartments with raised bands, ruled and lettered in red and black, upper joint cracked but holding with old inner hinge repair, covers a little darkened and scratched, joint and extremities somewhat worn, with New Haven Connecticut bookbinders label on inside rear pastedown; with the signature of Betram B. Boltwood on title-page, and the book-plate of Lawrence Badash on front pastedown.