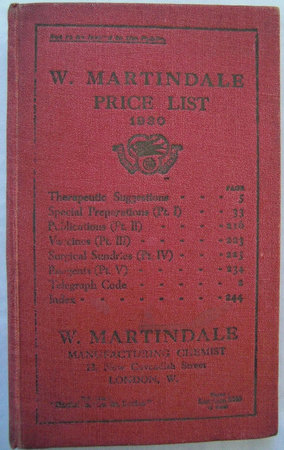 1930. Small 8vo, pp. 255, [1] advertisement, and with map on verso of front free endpaper, and further advertisement on recto of final free endpaper; paper a little browned due to paper quality; A comprehensive price list of ‘special preparations, and a general run of chemicals and drugs, in consecutive order’, and issued by the famous London pharmaceutical firm of William Martindale.
The company was best remembered for its extensive compendium of pharmacy, ‘The Extra Pharmacopoeia’ first published in 1883, and by the 1930 had reached its 19th edition, as promoted on the final leaf of the present trade list.
William Martindale (1840-1902) began trading in 1873, the business being situated in New Cavendish Street, and trading as W. Martindale. In the 1890s William's son, William Harrison Martindale (1874-1932) assumed control of his father's firm and expanded the manufacturing side of the business. 1928 he rebuilt the New Cavendish Street premises and erected a factory in Chenies Mews behind University College Hospital. The business, W. Martindale, was acquired by Savory & Moore Ltd in 1933, following which the retail operation at New Cavendish Street continued to trade as W. Martindale until the mid-1970s. See http://www.histpharm.org/40ishpBerlin/P51P.pdf.