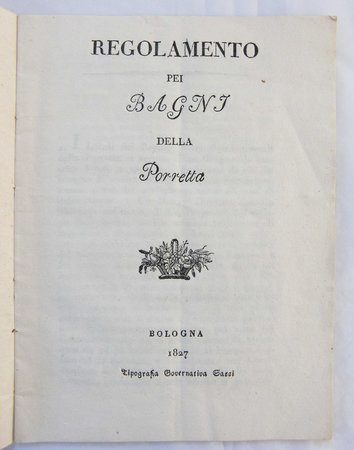 1827. 8vo, pp. 18, [2] blanks; with small appealing woodcut title-page vignette; some light creasing, otherwise clean and crisp; stitched as issued in the original plain wrappers, with small paper label on upper cover with the number ‘24’ in ink, covers a little soiled, evidence of previous folds; an appealing copy. Scarce printed tariff and regulations for the noted thermal baths of Porretta in the Province of Bologna, famed for their sulphurous waters and in particular for the treatment of respiratory diseases.
The tail of p. 16 is dated ‘Bologna li 15. Giugno 1827, G. Card. Albani’, identified on ICCU as Giuseppe Albani (1750-1834), who was legate of Bologna.

Bibliography: Not on OCLC; one copy on ICCU in Bologna.