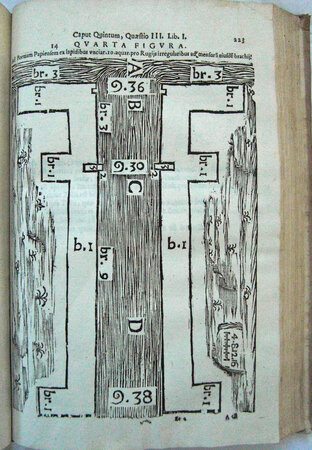 [1670]-1673-1680-1686. Four volumes, small folio, pp. [xxxviii], 412, [62], possibly without initial first blank; [xl], 466, lxxvi; [xxxii], 291, [1] blank, [68]; [xii], lxxix, [i] blank, 570, [9]; with engraved frontispiece portrait of the dedicatee Bartholomeo Arese in Vol II, engraved vignette at head of his dedication, woodcut printer’s devices, copious woodcut head- and tail-pieces and 39 appealing woodcut diagrams and illustrations (of which 25 are full-page, 6 of which are folding); overall quite clean and crisp, with some occasional faint marginal dampstaining, a few small stains, and some gatherings somewhat browned, Vol IV with some noticeable foxing, small tear in text of Vol II at p. 351 due to paper flaw but with no, with slight loss of text due to abrasion on p. 417, upper margins of few few leaves of Vol III with stab mark, Vol IV p. 145 with old repair at upper margin, and small hole with minor loss at p. 344; with contemporary inscription ‘Ex libris Malsoni’ on titles and half-titles; in contemporary vellum, spines in compartments with raised bands, with author and title in brown ink in contemporary ms, previous paper labels at head of Vols I and II (and evident on Vols III and IV), spines somewhat worn with loss of vellum along bands, with further splits at head and tail of joints, most prominent in volume I, Vol III with small stab hole in upper cover, covers a little soiled and stained, extremities rubbed and somewhat worn; overall an appealing unsophisticated set. First edition of this rare and exhaustive 17th century scientific, technical and legal work on aqueducts, highly comprehensive in scope and covering a wide range of topics including the regulation of rivers, problems of hydraulics, and water rights and supply.
Francesco Maria Pecchi (1618-1693) was a professor of canon law at Pavia from 1659 to 1687 and Archdeacon of the Cathedral of Pavia, where he is buried. As a result of Italy’s mountainous geography and extensive coastline, the science of training and regulating rivers developed to its highest degree in Italy by the end of the 17th century. It was in this field that Pecchi was to make his name, and in the history of law he is known as the father of modern water legislation as a result of this important treatise on civil and cannon law, together with his other extensive work ‘Tractatus de Servitutibus’ (1689).
The numerous woodcut diagrams and tables illustrating cases of water rights have a beautiful and most appealing naivety. It was reprinted in 1707, and again in 1840 - a testament to its importance and unsurpassed pertinence and scholarship.