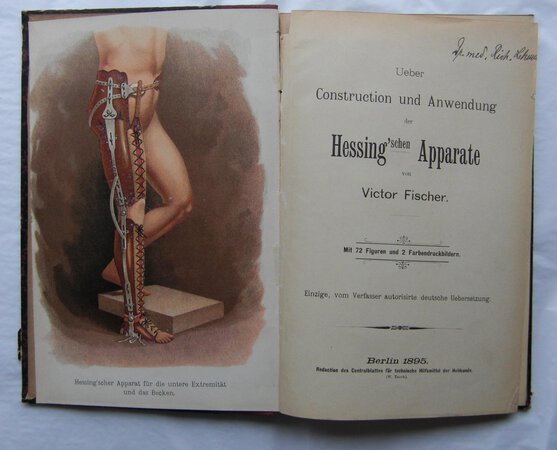 1895. 8vo, pp. 130; with two chromolithograph plates and numerous text illustrations; paper a little browned; first plate and title-page almost detached and gutter cracked and exposed, with slight rubbing to second chromolithograph, but with no significant loss; First German edition of this detailed introduction on the construction and application of a range of orthopaedic supports, braces and corsets, as designed by the noted ‘lay’ orthopaedic surgeon, Friedrich von Hessing (1838-1918). Though with no formal medical training, Hessing founded his Orthopaedic clinic in 1868 near Augsburg, and soon found acclaim for his invention of a number of therapeutic devices, used in particular to treat children with polio, in particular to a brace which bears his name.
The author of the present work, Victor (Gyözö) Fischer, was a physician in Hungary, and originally published the work in Budapest in 1893 (A Hessing-Keszulekek Szerkezete es Alkalmazasa’), having seen for himself, over a period of some five years, the many benefits derived through the use of Hessing’s apparatus. In his preface, he thanks in particular Dr. Ladislaus Verebély at the University of Budapest, and the head of the surgical division at the poor children’s hospital, for his assistance. The numerous pencil drawings are taken from ‘life’ of patients treated. Giving such a glowing testimony, based upon case histories, it seems natural that the work would be translated into Germany, to help further promote the Augsburg Institute, and the work of its founder, to whom the present work is dedicated.
‘As the proprietor of an orthopaedic hospital, he experienced many difficulties in the first few years of his career in particular. As a self-taught medical practitioner -Hessing never attended medical school - he faced harsh criticism from the world of orthodox medicine. He needed great drive and tenacity to overcome this antagonism, and eventually his success proved him right. The “orthopaedic brace” he developed and his inventions for treating war victims helped him achieve spectacular successes and carried the reputation of Hessing’s Medical Institution far beyond Germany’s borders. By 1903 more than 60,000 patients had been cared for in the Hessing Foundation, including members of the higher ranks of European nobility’ (The Hessing-Stiftung website, the Hessing Foundation remaining in operation to this day). OCLC locates a copy at the NLM, with a small number in Germany.