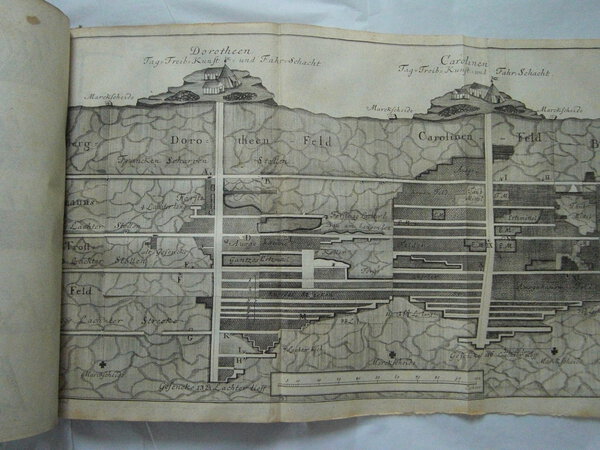 1765. Two works in one volume, first work in two parts, small folio; pp. [x], 10, 152, 151-8, [159] part title dated 1761, [160] blank, [161]-200, with attractive woodcut head- and tail-pieces and initials, with one half page copper engraving on p. 163, and 20 copper engraved plates (of which four folding, plate XII particularly large): pp. [iv], 316, with woodcut headpieces, and with 28 copper engraved plates (of which three folding, plate IV another large and striking image); pp. [x], vi, 254, [2] errata and blank, with attractive woodcut head- and tail-pieces and initials; paper a little browned throughout due to quality, with some occasional faint marginal dampstaining, with some slightly more prominent staining in a couple of places in part II of the Acta at pp. 120-124 and p. 141-3, small stamped monograph of ‘G.D.’ on verso of both main title-pages, and some occasional neat pencil annotations and ink corrections in text; overall clean and crisp; in contemporary half-sheep over marbled paste-paper boards, spine in compartments with raised bands, ruled in blind, head of spine worn and exposing headband which is frayed, faint and illegible manuscript at head of spine, spine a little nicked in places, joints cracked but holding, extremities somewhat worn and rubbed, with slight surface wear; still a good copy. First editions of two classic late eighteenth century works on mining technology and the history of mining in Germany, attractively illustrated with a number of detailed copper engravings, the work of Hans Calvör (1686-1766), a teacher at Clausthal and pastor at Altenau.
The ‘Acta historico-chronologico-mechanica’ is one of the most impressive and important German works on mining technology of the 18th century. “A valuable record of mining machinery and mining operations, as practised in Germany during the middle of the XVIIIth century. It was intended as a supplement to Schlüter’s Gründlicher Unterricht von Hüttenwerken” (Sotheran 1st supplement 6384). The attractive plates depict machinery, tunnels, and metallurgical apparatus. It is here bound together with Calvör’s invaluable historical companion volume, and which prints for the first and only time much original material which is now lost concerning the most important mining area of Germany. Mining had been carried on in the Harz mountains since the middle of the 10th century and Clausthal and St Andreasberg in the Upper Harz were the chief centres, and were sources of a number of metals and minerals including silver, lead, gold, copper, iron, sulphur, alum, and arsenic. The two works thus provide an important and invaluable insight late eighteenth century mining practices.