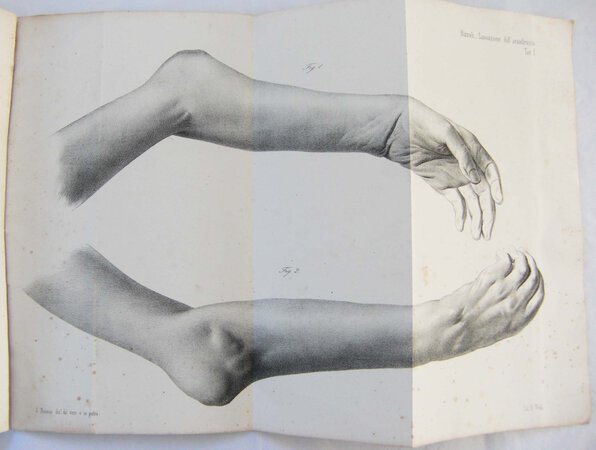 1863. Large 4to, pp. 17, [1] blank; with four large folding lithograph plates; title-page and plates a little foxed, with some minor dust-soiling; stitched as issued in the original plain wrappers, head and tail of spine chipped, covers a little foxed and soiled, extremities a little furled with a couple of small nicks. A detailed offprint of a paper discussing a traumatic dislocation of the humerus, accompanied by four fine lithographs, by Francesco Rizzoli (1809-80), professor of surgery and obstetrics at Bologna, and considered ‘the father of Italian orthopedics’ (Castiglioni, p. 716). It was first presented before the Bologna Institute of Sciences and printed in their Memoirs. ‘Italy has contributed illustrious figures to orthopaedic surgery. F. Rizzoli of Bologna, one of the first to recognize the need for the systematic study of diseases of motor apparatus, founded the institute which now bears his name, from which have come many valuable studies’ (ibid, p. 878). An outstanding operative surgeon, ‘he introduced a compressor for aneurysms, a tracheotomy, cystotomy, lithotrite, enterotome, osteoclast and performed acupressure as early as 1854’ (GM 5610 for his two volume Collezione della memorie chirurgische ed ostetriche, 1869, in which the present account was considered worthy and important enough for consideration in Vol I). A contemporary of, and indeed relation by marriage to, Paolo Baroni, Rizzoli was an integral part of a thriving scientific and medical community in Bologna, and which was at the heart of much medical advancement in Italy at the time.

Bibliography: Not on OCLC, with ICCU locating only two copies in Italy.