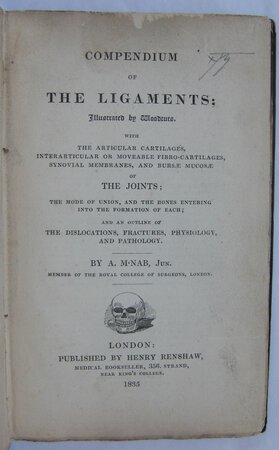 COMPENDIUM OF THE LIGAMENTS; Illustrated by woodcuts. With the articular cartilages, interarticular or moveable fibro-cartilages, synovial membranes, and bursæ mucosæ of the joints; The mode of union, and the bones entering into the formation of each; and an outline of the dislocations, fractures, physiology, and pathology. London: Published by Henry Renshaw, Medical bookseller, 356, Strand, near King’s College. 1835.

1835. Small 8vo, pp. viii, 86, with a number of small woodcuts; title page a little soiled with some light paper abrasion at upper margin, lightly browned throughout, particularly at margins; uncut in the original green pebble-grained cloth, with printed paper label on upper cover (somewhat soiled), and remains of paper label along spine, joints and head and tail of spine neatly repaired. First edition of this uncommon introduction to the fibrous structures in particular, by Alexander M’Nab, Jun ‘Member of the Royal College of Surgeons, London’. According to the preface, Macnab has drawn upon more ‘voluminous works’, and hopes that his abridged compilation will provide a more accessible work for those ‘unable to conveniently to peruse more elaborate productions’. The woodcuts are apparently by ‘Mr Berryman’, and although as far as we can tell, Macnab makes no direction citation from other works, he does refer to case histories as described by physicians both in England, Europe and America, including ‘Dr. Kirkbride, resident physician of the Pennsylvania Hospital’, (p. 22) ‘Dr. Warren of Boston’ (p. 23), Dupuytren (p. 23), Bichat (p. 56) Delpech (p. 65) and ‘Mr. Hunter’ (p. 62) as well as a number of cases highlighted in the Medical Gazette.

Bibliography: OCLC locates copies at the British Library, Cambridge, Oxford, Aberdeen, the NLM and the College of Physicians.