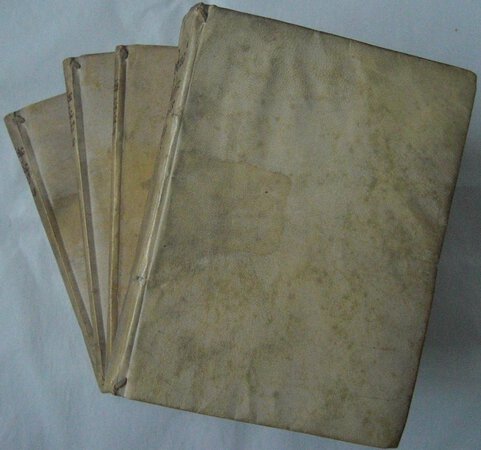 < >
One of the first dedicated medical journals - with a number of contemporary annotations
BLEGNY, Nicolas and Theophile BONET.

1680-1682-1682-1685-1685. Five parts in four volumes, 4to; I. pp. [xvi] including initial blank, 270, 271-332, [10], with engraved frontispiece and 8 engraved plates (of which three folding, plate VI misbound at p. 252 rather than p. 152, and plate VIII misnumbered as VII); II. pp. [ii] blank, [vi], 264; with engraved frontispiece (the same as in vol. I) and 3 engraved plates; III. pp. 153 [ie 155], [11] index, [1] blank, with 3 engraved plates; IV. pp. [ii] half title for parts IV and V, [viii], 368, with engraved frontispiece (same as in previous volumess) and 3 engraved plates, (of which 2 folding); V. pp. [ii], 104, 145-160, 121-252, [4], with 1 engraved plate, and with tipped in contemporary handwritten note at p. 54, and with frequent mispaginations; volumes IV and V with shared half-title; with appealing woodcut title-page vignettes and head- and tail-pieces; all five volumes somewhat browned and foxed, with some occasional staining, usually from ink blotting; all five volumes with contemporary marginal annotations in brown ink, more frequent in the final two volumes, and with further ink notes listing items of interest on either rear endpaper, or rear paste-down of each volume; bound in contemporary vellum, titles in neat manuscript on spines, front inner hinges of Vols I and IV neatly repaired, covers a little soiled and stained, evidence of previous paper labels, extremities lightly bumped and worn; overall a good copy. First Latin edition, all published, and which despite its somewhat astrological sounding title, is an important and early medical periodical, and the brain-child of the controversial and colourful French physician Nicolas de Blégny (1652-1722), here anonymously translated and then continued into Latin by Théophile Bonet.
It was begun in the previous year, in 1679, originally published as ‘Nouvelles découvertes sur toutes les parties de la médecine’. Though preceded by scientific journals such as the Transactions of the Royal Society, and Bartholin’s Acta medica et philosophica Hafniensia (1673-1680), Blegny’s contribution is considered to be the first dedicated medical periodical in the vernacular, aimed at, and therefore more accessible to, a wider readership than just traditional academic circles. ‘Its popularity is evidenced by its translation into German as Monatliche neueröffnet Anmerckungen (Hamburg, 1680). It was translated into Latin, and continued by Théophile Bonet as Zodiacus medico-gallicus (Geneva, 1680-1685)’ (Garrison, History of Medicine, p 281). Issued monthly, of the first French issue in January 1679 Blegny states in the preface that it was ‘his intention to bring together all those discoveries, experiences, and comments that may be found useful in the art of medicine. In order that he may continue to do so, he urges all physicians, surgeons, and apothecaries, both Galenic and chemical, those residing abroad as well as those in France, to send him their discoveries... Each issue, he says, will be sold for five sols, which, he adds, is just sufficient to reimburse him for the expenses entailed in publication’ (ibid p. 5).
The present Latin translation includes a striking frontispiece representing Apollo, the patron of medicine, surrounded by the signs of the zodiac, with a simple but appealing scene of the city of Geneva seen below. With a ‘chapter’ as it were for each month of each year, the periodical provides a wealth of material, including accounts of recent medical activities, unusual and notable surgical and clinical case histories, notes on therapeutics and materia medica, discussions on practices such as bloodletting, autopsy reports, together with reports of incredible abnormalities and curiosities. Contributors for the various articles are named, with a number seemingly by Blegny himself, who also comments upon the work of his contributors, much as a modern editor would do. ‘Thus we have cases of vicarious menstruation, petrification of the semen, a wound of the heart, a hanged person restored to life, extraction of a urethral calculus followed by blindness... a hydatidiform mole, monstrous births... and transposition of the viscera. Besides these, however, there are lengthy disquisition's on topics of current interest, such as fevers and febrigures, on the nature of the teeth, their diseases and appropriate remedies, the generation of man, the use of quinquina in fevers, the letting of blood... on various aspects of physics... [and] one or two articles of an astrological nature’ (Nicholls, p. 201).
The French version had a somewhat checkered career, and ran until 1683, though under variant titles of ‘Le temple d’Esculape (1680), and ‘Journal des Nouvelles Descouvertes (1681-1683). At that point the Faculty of Medicine finally withdrew his privilege, Blegny having constantly challenged their authority and that of the traditional medical communities, and having himself been accused of all kinds of nefarious activities. Undeterred, Blegny transferred editorship to a Dr Gautier in Amsterdam, publication resuming in 1684 under the title Mercure Savant. A rival in Paris, Abbé de la Roque, took up the mantle of a Parisian periodical, and in 1681 began his own Journal de Savants, which itself ran to 1685.
Whilst the whole publication may have had a somewhat stormy and ultimately short-lived path, Blegny was nevertheless something of a pioneer in medical journalism, through his attempts to make medical information more widely and socially available.
We are pleased to offer in addition a small 12mo volume containing the first three months of the original 1679 edition Nouvelles découvertes sur toutes les parties de la médecine, which is bound with the January to April issues of the 1680 Le temple d’Esculape – a testament to the original format of publication in individual monthly parts to be purchased separately.

Bibliography: See Kronick, “Devant le Deluge” and other essas on Early Modern Scientific Communication, ff. 1; see also Nicholls, ‘Nicolas de Blegny and the First Medical Periodical’ in The Canadian Medical Association Journal, August 1934, ff. 198; Wellcome II, p. 180; Krivatsy 1376; collated complete against both the BL copy (although that does include one additional half-title for part IV excluded in this copy), and the copy at Glasgow - although plates not bound in varying orders in each copy; further complete sets located at the Huntington, Harvard, Texas and McGill and the Wellcome.