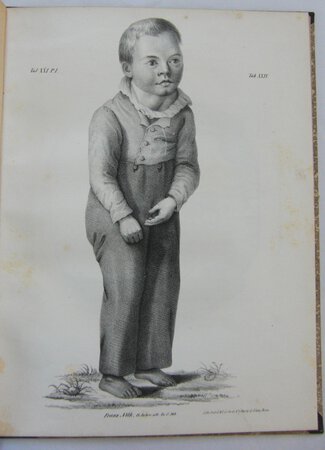 1845. 4to, pp. [ii] title-page, 329 - 398; with eight lithograph plates; somewhat browned and foxed throughout (including to some of the plates), with some dampstaining to lower margins, upper margins and fore-edges of final two leaves with later tape repairs, title-page and final leaf gutters repaired, with a number of further gutters strengthened; Offprint. An important, detailed, and well illustrated study on the pathology of cretinism, one of a number of works published on the subject during the first half of the nineteenth century. The noted psychiatrist Friedrich Karl Stahl (1811-1873) began his work in 1837 in Sulzheim near Schweinfurt, a region in which endemic cretinism was observed. This prompted him to undertake extensive studies on the disease, the results of which were first presented to the Academy in March 1843, and were then published in the Nova Acta Academiae in 1845. It gained him membership of the German Academy of Natural Sciences in 1844, with Stahl subsequently granted a generous travel grant by Ludwig II in 1846, allowing him to continue his research outside of Bavaria. He visited Vienna, Prague, Wurrtemberg, Salzburg, Styria and Switzerland, with the results of his further studies published in 1848 as Neue Beitrage zur Physiognomik und pathologischen Anatomie der Idiotia edemica. Stahl’s work and his references to individual suture growths occurring in the skulls of patients, subsequently influenced Rudolf Virchow’s doctrine of the developmental history of Cretinism and the skulls.
The eight lithographs by Henry & Cohen of Bonn are particularly striking - notably the four depicting specific case histories. Hirsch V, p. 503.

Condition: in later brown back cloth marbled boards, spine lettered in gilt, spine sunned with small split to lower joint, outer margins a little faded and rubbed, with a couple of small stains to outer margins of rear covers; from the library of Dr. Carl Wegelin with his bookplate and blindstamp.