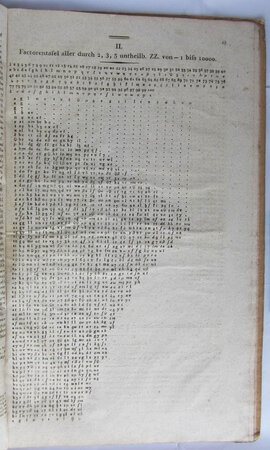 1804. Small folio, pp. [iv], 22, 28; pp. 21-22 bound upside down; title-page with light dampstain, with some light browning and soiling throughout, but generally clean and crisp; old library stamp on verso of title-page, crossed out with crayon and which has caused a small paper tear; in contemporary tan paste-paper boards, paper label on spine lettered in black, label slightly chipped, head and tail of spine a little worn, with further light scuffing and wear to spine and covers, some light spotting and soiling, extremities a little bumped and worn; still a good copy. Scarce and attractively printed work of factors and prime numbers, published by the noted educator and philosopher Karl Christian Krause (1781-1832). In this, one of his first works, Krause presents a table of 22 pages showing all products <100 000 of two primes, a table of primes <100 000 with letters for 01, 03,..., 99, and (pp. 25-28) a factor table to 10000 by use of letters for numbers <100.
‘In his introduction, Krause mentions the tables of Lambert [10] and Felkel [2,3,4,5], and he understands the objections towards the use of letters for numbers which was favoured by Felkel. He nevertheless decided to provide his two short tables, in order to show that letters can be used more conveniently than in Felkel’s table. The main tables in Krause’s book, however, do not use letters. Krause wrote that his tables were computed (neuberechnet), and presumably not copied, although he certainly compared his tables with earlier ones.’ (Roegel, A reconstruction of Krause’s table of factors, p. 3).
Krause studied philosophy and mathematics at the University of Jena under Fichte and Schelling. He later went to Berlin, Göttingen (where he was one of Schopenhauer’s teachers), and Munich. One of the early natural philosophers, his “Krausismo” philosophical system influenced the theories of Kant and Hegel, and during the 19th century he was regarded as one of the most important of the German philosophers, his system attracting particular attention in France and Spain.

Bibliography: Scarce: Seemingly no copies in the US, with KVK locating copies in Berlin, Coburg, Augsburg and University College, London: a number of digital copies listed in Germany.