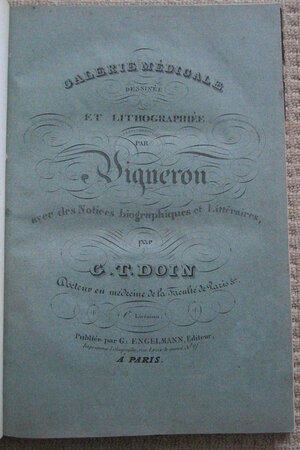 < >
Portraits of the most notable figures in medical history
DOIN, G. T. AND P. R. VIGNERON.

1825. Small folio; pp. [ii] original printed green paper wrapper to first fascicle bound in as general title, [64] of biographical text; with 32 lithograph portraits; somewhat foxed throughout, with the text leaves for Linné, Aldrovani, Celsus, Sydenham and Bartez rather browned, and those for Chaussier and Haller at the end of the work heavily browned; Rare. A complete set bound together of this most striking lithograph ‘gallery’ of some of the most notable figures in medical history.
The inspiration of the physician Guillaume Tell Doin (1794-1845), the lithographer Pierre Roche Vigneron (1789-1872), and the publisher G. Engelmann (1788-1839), according to a contemporary review in the ‘Archives générales de médecine; Journal publié par une société de médecins’ (Tome IX, p. 312, Sept 1825), the original intention was to produce one hundred portraits, the whole publication issued in a series of monthly fascicles containing four portraits together with accompanying biographical text. Normal copies on plain paper would cost 6fr, whilst more luxurious copies on China paper priced at 9fr. However, as later notices reveal, the plan was revised down to a proposed series of 10 fascicles - and indeed ultimately only eight were produced, with 32 fine lithograph portraits issued. No more were published, and being issued in individual fascicles, the plates more often than not, now appear individually. It is thus uncommon to find a bound copy of the complete series.
In the present copy beginning with Hippocrates, (the order of the copy found at Padova is different) Doin and Vigneron have concentrated upon Western luminaries both ancient and modern, and thus we find included Galen, Leonard Fuchs, Andreas Vesalius, William Harvey, Albrecht von Haller, Philippe Pinel, Herman Boerhaave, Paul Joseph Barthez, and Edward Jenner. From the wider sphere, portraits of Carl Linnaeus and Nicolas Copernicus are also included, with the medieval Islamic polymath Averroes chosen as the sole representative from the Arabic world. Brunet II-789 (edition de 1825-1826); Pauly, Bibliographie des sciences medicales, I, p. 59 noting that only parts 1-8 published: OCLC locates copies at the New York Academy of Medicine, Syraceuse, Yale, the NLM and the Wellcome.