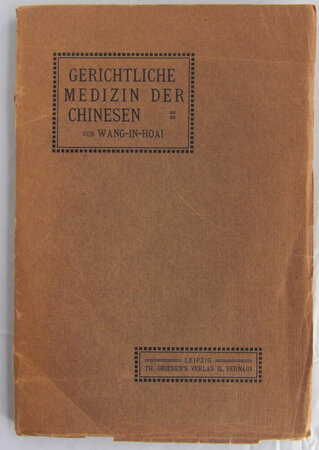 1908. 8vo, pp. viii, 174, [2] advertisement and blank; some very occasional light marginal browning, gutter cracked t p. 81 and 113 but holding firm; uncut in the original brown printed card wrappers, old tape repair to front inside cover, head of spine cracked and nicked with evidence of old repair, a couple of small marginal nicks, covers a little creased. First German edition. A fascination example of how noted and pioneering Chinese medical texts were gradually disseminated for a European audience. The present work by the noted military physician Dr Henry Breitenstein (1848-1930), is a translation of a Dutch work of 1863 by the renowned diplomat, pharmacologist, and sinologist Dr. C. F. M. de Grijs (or de Grys - 1832-1902).
Though now somewhat forgotten, de Grijs had sailed to China in 1857 on a consular mission, assigned with the task of collecting and identifying Chinese flora and fauna in the Amoy region. Many of his papers are now preserved at Leiden University, and he contributed a number of scientific and botanical papers, including articles on Chinese dyes, and publishing an early and important Dutch-Chinese dictionary.
One of his most important contributions, however, was his 1863 translation of the Xiyuan Lu (or Se yuen luh), an early handbook on forensic medicine dating from the Yuan dynasty (1279-1368), 300 years before anything comparable appeared in Europe, according to de Grijs in his introduction. First published in around 1247, it was reprinted in the 15th century and from that time came into general use in the courts of justice as a guide to the duties of coroner, and thus forms an interesting and early record of the theoretical condition of jurisprudence at that time. De Grijs’ translation was published by the Batavian Society of Arts and Sciences in 1863 as Geregtelijke geneeskund, uit het Chineesch vertaald (Forensic Medicine, translated from the Chinese). ‘De Grijs used an edition from 1830 with the title Xiyuan lu jizheng huizuan... In his introduction, De Grijs wrote: “This work is written in a clear style and the main difficulty in translating is to find European synonyms for the Chinese names of plants, animals, stones, medicines, parts of the body, etc.“. He then gave a list of European and Chinese works he had consulted ending: “To what extent I have succeeded in finding the correct European names is up to experts to judge”’ (Kuiper, p 192). A number of consistent misspellings were made however, apparently due to misinterpretations of De Grijs’ handwriting. Dr Henry Breitenstein, himself a military physician, here presents a German translation of that work of 1863, making no corrections, but with the addition of a number of notes. Of interest, Kuiper suggests that Breitenstein felt the work to be of more importance as a guide to Chinese manners and customs, than as a technical handbook of forensic medicine. Modern scholars, however, have come to highly appreciate the handbook. An English translation was first made in 1855 by William Harland and published in Hong Kong as ‘Records of the Washing away of Injuries’. A scholarly edition was published in 1981 by Brian E. McKnight.