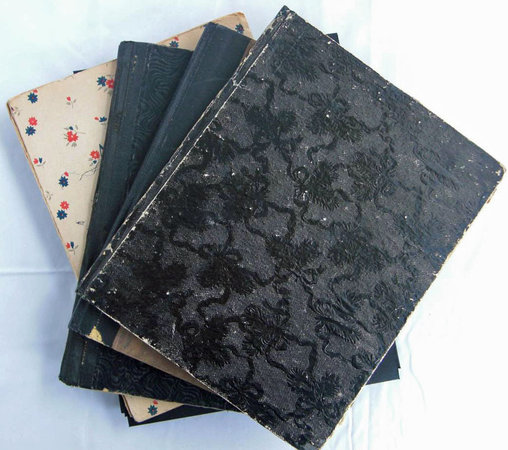 FIVE MANUSCRIPT NOTEBOOKS, IN ENGLISH, CHINESE AND GERMAN, neatly penned in ink and pencil and recording the Chinese language course undertaken by her in Shanghai between 1942-1945.

1942. Together five volumes of 4to notebooks, four ruled and one plain paper; I. ff. [30], [1] blank, [6], [15] blank, [86], [20], with a further loosely inserted note; II. pp. 117, 120-121, 118-119, 120-132, [14] blank; III. pp. [ii], 8, 13-45, [46] -[72], [64] blank, including a number of newspaper clippings neatly pasted in; IV. pp. 91, [57] blank; V. ff. [27]; neatly penned in ink and pencil in a single hand, with a couple of pages typed; notebooks all well used and thus with some fraying, marginal nicks and edge wear, signs of one or two pages removed, with some light browning and soiling throughout; A fascinating insight into the teaching of Chinese to foreign residents during WWII. Baroness Irene von Oertzen (1908-2007) and her husband Baron Klaus-Detlof von Oertzen (1894-1991) were well-known as passionate collectors of Chinese art. Von Oertzen was a pioneer in the early German car industry, and is indeed the man behind the iconic Audi logo. As a member of the Prussian aristocracy, he turned his back on Hitler’s Germany and in 1935 the couple moved to South Africa. After the outbreak of war, they were interned in prison camps in the Dutch East Indies in May 1940, the Baroness then being separated from her husband and transferred to China. There she gained employment at the Canadian Consul, and the present notebooks record her studious attempts to learn the Chinese language. Indeed she subsequently became fluent and developed a great appreciation for Chinese art and for jade carvings in particular. In time, Von Oertzen was also transferred to China where he established a car dealership, although the eventual civil strife in the country forced them to return to South Africa, and where he later became Volkswagen’s main representative, earning the soubriquet of ‘the father of Volkswagen in South Africa’.
As the notebooks clearly reflect, Irene von Oertzen soon mastered both written and spoken Chinese. Written in English, German and Chinese, the notebooks include much vocabulary, text excerpts from Chinese literature in German translation, and with the last two books bearing the title ‘Newspaper Chinese Course’ and containing, in addition to vocabulary, several glued Chinese newspaper clippings.
Her time spent in China, and her clearly devotion to Chinese culture and language, as conveyed in these five notebooks, had a lasting impression on both Irene and Klaus, and over the years, they created a large and renowned private collection of valuable Chinese art (see S. Howard Hansford, Jade: Essence of Hills and Streams. The Von Oertzen Collection).