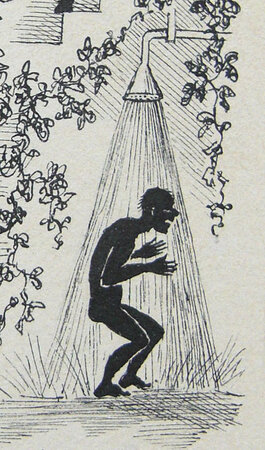 < >
From a patient ‘on the mend’ to his Doctor and fellow ‘regulars’
[HYDROTHERAPY.] [AMUSING ENGRAVED BROADSIDE ILLUSTRATED IN WATERCOLOUR.]

1880. Single sheet of thick artist paper, 315 x 245mm, with central oval view of Bad Schoenbrunn done in watercolour, surrounded by a series of satirical black and white silhouette sketches and vignettes seemingly engraved, though possibly executed in pen and ink; print mounted on card 435 x 345mm; small correction made to the lower central silhouette, with what appears to be a very small photograph image of the head of Peter Joseph Hegglin, pasted on to replace original image; some light spotting and browning, otherwise very striking. An enchanting and unique ‘souvenir’ from the famous health resort of Bad Schönbrunn in Menzingen. Sadly anonymous, and seemingly executed at the turn of the century, the striking broadside comprises an appealing central watercolour vignette of the Spa buildings, set against an idyllic background of rolling hills, woodland and distant snow-capped mountains. This vignette is surrounded by a series of black and white silhouette vignettes, seemingly engraved, though resembling pen and ink drawings. Through this series of enchanting scenes, we are shown a number of the diversions, healthy activities, and treatments, on offer at the Spa. Those at the head of the broadside represent some of the outdoor and leisure activities available to patrons, including gentle walks in the countryside, a game of skittles, three men enjoying a game of billiards, musical soirees, painting, and nature watching. The silhouettes below the central oval focus more upon the treatments, a rather startled looking figure enduring various cold showers, towel wraps, and cold water hosing.
Two figures can be seen at the tail of the image - one seemingly taking the pulse of the other, as he is holding a pocket watch in his hand. Above the two figures flies a wreath-bearing dove. Of added appeal, the head of the ‘doctor’ has been replaced with what appears to be a very small original photograph image. We presume this to be that of Peter Joseph Hegglin (1832-1893) himself, the founder of the Spa in 1857, although it could also be his son Joseph Hegglin-Kerckhoffs (1862-1920) who appears to have taken over the running of the establishment. It eventually closed in 1926.
Sadly anonymous, the impression is that this wonderful ‘souvenir’ has been created by a previous patient ‘now on the mend’, and who has perhaps had a small number of these engravings published to give as gifts to his fellow patients and the good Doctor. A unique and most charming depiction.
Two further attractive watercolour depiction's of the Spa are included with this image.