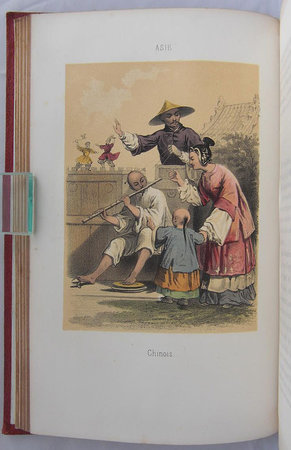 1862. 8vo, pp. [iv], 203, [1]; with 12 chromolithograph plates (including frontispiece), all retaining the original tissue guards, together with numerous engraved text vignettes; a little foxed and browned throughout, more prominent in one or two places; in the original red morocco backed publisher’s cloth, covers ruled in gilt, spine in compartments with raised bands, lettered and decorated in gilt, head and tail of spine a little rubbed and worn, covers lightly stained, extremities a little bumped and rubbed; a good copy. First edition of this appealing work for children, both an introduction to geography as well as a book of costume. It was one of a number of works published as part of the series ‘Bibliotheque de la Jeunesse’. M. Castillon, a professor at the Collège Sainte-Barbe in Paris, one of the oldest Colleges in the city, was the author of a number of educational and recreational works of scientific interest for a younger audience. These texts were often chosen by schools to be given as prizes in recognition of academic success.
The attractive lithographs are the work of either Hippolyte Louis Emile Pauquet (b. 1797) or Polydor Jean Charles Pauquet (b 1800) is responsible for the illustrations. Both brothers, from the publishing house of Pauquet Frères, were engravers, painters & illustrators during the mid 19th century.