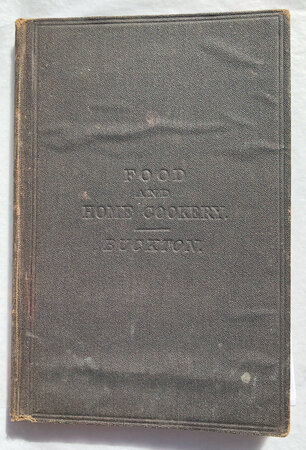 FOOD AND HOME COOKERY A course of instruction in practical cookery and cleaning, for children in elementary schools, as followed in the schools of the Leeds School Board. Fourth edition. London, Longmans, Green, and Co.

1879. 8vo, pp. x, [ii], 108; with four full page steel engraving plates (two highlighted in red and two described as being ‘from photograph’), and a number of smaller text illustrations; a little browned throughout with some occasional minor spotting and soiling, gutters exposed in a couple of plates; with two loosely inserted later recipes for barley water and some contemporary marginal annotations; Fourth edition (same year as the first) of this later Victorian introduction to home economics, one of a number of instructional works intended for the specific use of working class women and children and written by the leading Yorkshire social reformer and philanthropist Catherine M. Buckton (1827-1904).
A founder member of the Ladies’ Council of the Yorkshire Board of Education, and the only ‘lady member of the Leeds School Board’, Catherine Buckton was a Unitarian and the wife of a local wool merchant and manufacturer. She had been delivering lecture courses for her fellow townswomen and ‘working sisters’ on a variety of health and sanitary topics for several years, including warning against the dangers of alcoholism, and advocating the benefits of vaccination. In 1875 some of these were published as ‘Health in the House. Twenty Five lectures on elementary physiology’, a work which was to prove immensely popular, going through several editions and subsequently being printed in Toronto. Clearly a passionate and indomitable woman, she here turns her attention to providing a ‘scheme of cookery’ in the hope of inducing in her young female charges ‘a love of cleanliness, personal neatness, and order; to give practical instruction; and to offer every aid to the girls and their parents to practise the lessons thus taught them in their own home’ (p. v).
The lessons were given fortnightly and lasted for an hour and a half. Printed recipes were provided to the girls, which could then be taken home and repeated. A founder of the Yorkshire School of Cookery, she states that eight cookery centres had been established in Leeds to provide instruction, though all based in simple classrooms, rather than specialised kitchens. Bearing in mind that the girls would most likely be living in one room with a large family, the need to teach the principles of neatness and order when cooking in a small space was considered a virtue. Indeed several clever space-saving devices are illustrated - including the cookery cupboard housing the stove, and all necessary utensils - the doors of which were designed to be removed and then used as a work surface for food preparation. The work is divided into nineteen lessons, including chapters on bread making, roasting, cooking for the sick and invalids, on soups and stocks, the end of each ‘lesson’ concluding with a series of questions to be answered at home as well as a recipe. The four full-page engravings, two of which are ‘from photographs’ depict the girls at their studies, a typical kitchen grate, and the adaptable storage cupboard.
At the same time, Buckton was also encouraging the girls to develop an interest in horticulture, and published ‘Town and Window Gardening’ (1879), once again based upon a series of lectures given to the children. Such was the success of the scheme that the School Board arranged for a Flower Show to be held, in which more than a thousand children competed. Crawford, The Women's Suffrage Movement in Britain and Ireland: A Regional Survey, p. 57.