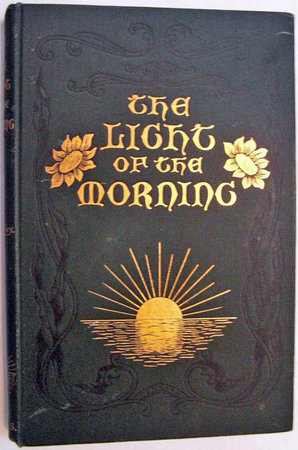 THE LIGHT OF THE MORNING The story of C.E.Z.M.S. work in the Kien-Ning prefecture of the Fuh-Kien Province, China. With introduction by John Rigg, M.B. C.M., with seventeen illustrations and two maps. London: Church of England Zenana Missionary Society ... and Marshall Brothers ...

1903. 8vo, 251, [1]; with seventeen halftone photographs (all but four full page) and two maps; very small rust mark at gutter of title-page, with some light soiling and marginal browning; First edition of this fervent account by Mary E. Darley, ‘A Missionary in China of the Church of England Zenana Missionary Society’ in which she reports on the activities and work of the mission, to lead souls ‘out of utter darkness into “His Marvellous Light”. Whilst inevitably focused upon the religious purpose of her stay in China, her account provides an insight into the role that women played in early 20th century missionary work, and in particular her work with local Chinese women and children, and the missions social and welfare work with lepers and the blind.

Condition: in the original green decorated cloth, upper cover tooled and lettered in black and gilt, gilt lettering on spine, head and tail of spine a little bumped, some light spotting and staining to rear cover, joints and extremities lightly rubbed and bumped.