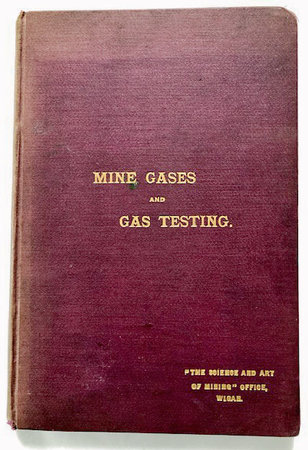 MINE GASES AND GAS TESTING for underground officials and workmen. Including an account of colliery explosions, coal dust, and breathing apparatus. With 16 Illustrations and diagrams. Wigan, Thomas Wall and Sons Limited, “The Science and Art of Mining” Office, Wigan. England. 1913.

1911. 8vo, pp. 150, [2] publishers’ advertisements; with photographic frontispiece, and 16 text diagrams and half-tone illustrations; small nick at outer margin of pp. 117-120, title-page a little browned, with occasional light soiling; with contemporary repair to front free endpaper; Uncommon first edition in book form of this practical work on mine safety, by the mechanical engineer J. W McTrusty ‘Lecturer on Mining to Warwickshire County Council’, and based upon a series of articles first published in ‘The Science and Art of Mining during 1911-12’. Aimed at mining firemen, examiners and deputies, there were written to help them to understand the new regulations brought in by the Coal Mines Act of 1911. The chapters deal in turn with safety issues surrounding mine air; carbon and oxides; black-damp; fire-damp; the diffusion of gases; shaft and underground fires; colliery explosions; the dangers of coal-dust; and with a final chapter on breathing apparatus. The Appendices include official advice on safety procedures to be followed at all mines.
A second edition was published in 1916, and was again issued in 1919. OCLC locates copies at Trinity College, Dublin, Cambridge, the National Library of Scotland, Swansea, Sheffield and Strathclude; only one copy in Canada located.