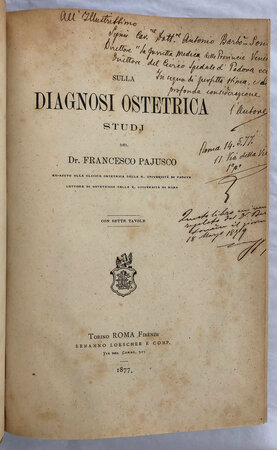 1877. 8vo, pp. ix, [i] blank, 388, [2] errata and blank; with seven folding lithograph plates, two in sepia, and four partially coloured in red and blue; text a little foxed and browned, though overall clean and crisp, final errata leaf creased; title-page fore-edge a little cropped clipping manuscript presentation inscription slightly affecting legibility; in contemporary vellum backed marbled boards, spine lettered and tooled in gilt, upper cover a little scratched with minor loss of paper, extremities lightly rubbed; a presentation copy with extensive and profuse inscription by the author of the title-page to ‘Dottre Antonio Barbõ-(Son[cin]? second named cropped) of Venice, dated ‘Roma 14.5.77’, and with later inscription in a second hand below (and somewhat illegible); and with later 20th book-stamp on front free endpaper ‘Ex-Libris dr Ivo Confontini’. First edition of this uncommon treatise on obstetric diagnosis, by the clinician Francesco Pajusco (also Paiusco, 1842-1881). Divided into three sections, this technical work highlighting physical methods of external and internal examination and diagnosis, deals in turn with the stages of pregnancy, childbirth, and finally ‘dello stato puerperale’. The work is accompanied by seven folding lithograph plates.
Pajusco, from Vincenza, graduated from Padua when he remained as an assistant for three years. He later became an extraordinary professor of obstetrics in Sassari on Sardinia, before becoming full professor at the University of Catania. He died at the age of 36 in 1881, whilst on a visit to Berlin as part of a scientific mission on behalf of the Ministry of Education. He was the author of a second work, ‘Fisiologia ed igiene del parto’ in 1878: both works were well received by his peers.
Pajusco has penned and an extensive and profuse presentation inscription on the title-page, to a colleague, whom we believe to be the fellow Paduan Antonio Barbo-Soncin, although the inscription has been cropped close a little. ‘All ‘Illustrissimo Signor Cav.re Dott.re Antoni Barbo-Son[cin] Direttore La Gazetta Medica delle Provincie Vene[te], Direttore del Civico Spedale d. Padova ece. In uqua di perfetto estima et di profonda consideraione l’Autore. Roma 14.5.77. 11 Via della Vi[?]’. A second shorter note in a second hand follows, but is sadly somewhat illegible, although suggests that the book was passed on once again in 1879.