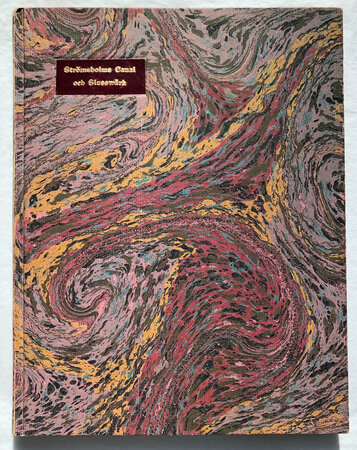 1797. Two works in one volume, 4to; [vi], [3]-8; pp. [ii], 36, [4]; with woodcut printers device on title, and woodcut head-piece, folding letterpress table and extremely large folding hand-coloured engraved map, 25 x 150cms and signed ‘E. Akerland’; title-page of Dissertatio a little foxed with further light foxing; Afhandling lightly foxed and soiled, with dampstain affecting the upper corners between pp. 13-29; folding map neatly remounted on new stub; in modern marbled boards, with red morocco label on upper cover lettered in gilt, spine a little sunned, with light rubbing to extremities; a good copy. A bound volume containing both Schenström’s Latin dissertation ‘Dissertatio de canalibus et catarractis in Svecia generatim, speciatim vero Strömshomensibus’, together with the much expanded Swedish translation of the same year, and which graphically illustrates this feat of Swedish canal building engineering through the the finely engraved and extensive folding map, nearly one and a half metres long, and which shows the entire stretch of the structure.
Work on the 62 mile long canal, intended to facilitate the transport of iron bar produced by the numerous steel works along the waterway, began in 1772 and was based upon plans by Johan Ullström. He was commissioned by the State mining authority (the Bergskollegium) to plan its construction, and concluded that he could use and connect existing lakes and waterways from Norra Barken and Smedjebacken to lake Mälaren in the south, meaning that a section of only 10km would have to be excavated manually. The overall difference in height of the water level over the length of the canal is 100 metres, requiring boats to pass through 26 locks. Indeed the rise or fall at Hallstahammer is 50 metres.
Initially estimated to take six years, the project actually took eighteen years to complete, largely due to the lack of investors. It was finally opened in 1795, and for many years was one of the principal freight shipping waterways in Sweden, though eventually superseded by the building of the StockholmWästeras-Bergslagen railway, with the last cargo to be shipped by canal in 1948.

Bibliography: OCLC locates copies at Harvard Business School, the National Library of Sweden, the Danish National Library, the Berlin Staatsbibliothek, and with the New York Public Library noting a bound copy both the Latin and Swedish works.