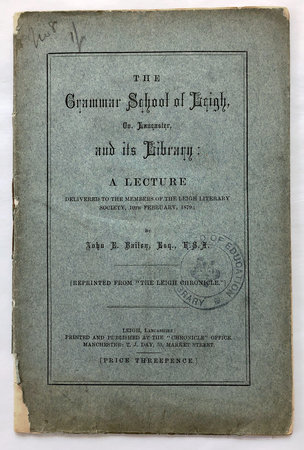 THE GRAMMAR SCHOOL OF LEIGH, Co. Lancaster, and its Library. A lecture delivered to the members of the Leigh Literary Society, 10th February, 1879. [Reprinted from “The Leigh Chronicle”.] Leigh, Lancashire: Printed and Published at the “Chronicle” Office. Manchester: T. J. Day, 53, Market Street. [Price threepence.] [1879].

1879. 8vo, pp. 30, [2]; a little spotted and browned throughout, with some marginal soiling, final verso more prominently soiled, with a few small marginal nicks and tears; evidence of previous vertical fold throughout, small library date stamp at tail of title-page verso; First separate edition, of this short essay first read before the Leigh Literary Society, effectively a fund-raising appeal to raise funds to preserve and grow the collection, and providing a rare insight into an established provincial school library. ‘The collection of books, about six score in number, forming the Library of the Grammar School in Leigh - the only relic of this kind in Lancashire - is interesting, not only on account of the comparative rarity of the volumes, but also from the many local reminiscences which are centred in them as being once owned, according to the inscriptions in them, by the benefactors, the masters, or scholars of the school. The books are also of value because they present a view of the kind of literature that served two hundred years ago to form part of a schoolmaster’s library, and likewise the common schoolbooks of the boys’ (p. 5).
The earliest Grammar schools were founded in the 16th century with the specific aim of teaching and instructing the children of the poor. One of the earliest was Manchester Grammar school, established in 1519. The North-west of England, in particular, benefited from the spread of ‘new learning’, with Dr Thomas Linacre, physician to Henry VII and an associate and contemporary of Thomas More and Erasmus, helping to reform education practices in nearly Wigan - only a few miles from Leigh, and where the present Grammar School was founded towards the end of the 16th century, although the exact date is unknown.
As the present essay reveals, the school benefited from the gift of a number of book collections during the 17th century, with an emphasis upon Latin and Greek classical texts, and upon theology. One former master, Ralph Pilling, is identified as being a principle benefactor, and who was also responsible for the erection of the present schoolhouse. Very much a working collection, Bailey notes that the 120 mainly 8vo volumes are ‘more or less in a defective condition’ having been traced and scribbled upon, lacking covers, and generally ‘ill-used by the boys’.
He highlights a number of what he considers to be the high-spots, including a 1652 edition of Record’s arithmetic unknown to Professor de Morgan; a copy of the Colloquies of Corderius; a 1612 Venice printing of ‘the Enchiridon Methodicon of Nicephorous ... an interesting specimen of Greek printing’; an edition of ‘Ethics or Moral Discipline’ by Eustachius (1573-1640); and a 1645 Amsterdam edition of Erasmus’s De Copia Verborum ac Rerum.
No doubt the ‘gem of the collection’, however, is a copy of Melanchthons’ Proverbs of Solomon from 1525, and bearing the Episcopal signature of Archbishop Thomas Cranmer, of Canterbury. How the copy ended up in ‘this obscure corner of England’ may never been ascertained, Bailey notes, but his books were dispersed when he was committed to the Tower by Queen Mary.
Bailey concludes is erudite essay with a plea to his audience, the Literary Society of Leigh, to honour the foundations laid by Ralph Pilling and to continue to ‘cultivate and disseminate a taste for reading and study - to enter into the spirit of his good deeds by rebuilding his old school, and by using what remains of his books to form the nucleus of a library for the schoolboys and for the town’ (p. 30). OCLC locates copies at Chicago, the New York Public Library, Manchester and the British Library.

Condition: stitched as issued in the original blue printed wrappers, spine chipped and worn with loss and somewhat delicate, though holding, with loss of corners to rear wrappers; ex-libris from the Board of Education with their library stamp on front cover, and book-label on rear wrapper.