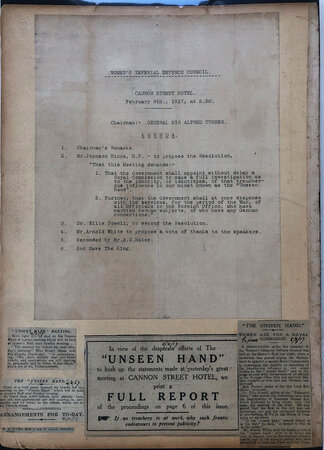 < >
Fighting the ‘enemies in our midst’ and routing out the German Fifth Column - Kitchener’s sister at the forefront
[WWI]. [WOMEN'S IMPERIAL DEFENCE COUNCIL.]

1918. Single folio sheet of thick card, 365 x 263mm, seemingly once part of a larger scrapbook of clippings but now loose, with typed agenda sheet and four small related newspaper clippings mounted on verso; recto comprised of a number of unrelated mounted newspaper clippings, small photographs, and membership forms; with remains of linen mount along one margin, card somewhat browned, with some marginal nicks and wear. An unusual, and at first glance rather innocuous if somewhat mysterious, collection of memorabilia, but which in fact shines a light upon the febrile climate of paranoia and suspicion which gripped London and the nation during WWI.
According to the Dictionary of British Women’s Organisations, 1825-1960, the Women’s Imperial Defence Council as a ‘non-political body’ ... only known from a report of a meeting at the Cannon Street Hotel, London, in 1917, chaired by General Sir Arthur Turner, and addressed exclusively to men, including the future Home Secretary, Sir William Joynson-Hicks’ (p. 169). This meeting, as revealed by the mounted printed agenda, was held on February 8th, 1917 at 2.30pm, with further speeches by Dr Ellis Powell, Mr Arnold White, and A. G. Hales. Such was the interest generated by this first gathering, that a second meeting was organised and held on March 4th at Queen’s Hall, for which over 8000 tickets were apparently sent out, according to the clippings also included here. It was presided over by ‘Mrs Parker, sister of the late Lord Kitchener’.
The formation of the Council, even though it appears to have proven only short-lived, gave a public forum and voice to the firm belief held by many of the existence of a secret German backed cabal or ‘Unseen Hand’, which since the beginning of the war was thought to have been undermining the very ability of the country effectively to pursue the war, by carrying out acts of espionage, and entrapping leading figures of government and the City alike through high-level vice rings, accusations of sexual perversion, female prostitution and bondage rackets. Spy fever inevitably gripped the nation, with over 9000 reports of suspected espionage received by the Metropolitan Police by September 1914. The sinking of the Lusitania in May 1915 only served to heighten the conspiracy theories. The ‘enemy in our midsts’ became an obsession and by the spring of 1917, when the Council held their meetings, MI5 had amassed the names of 250,000 aliens in Britain, with more detailed files held for over 27,000 suspects.
As the printed agenda states, the purpose of the meeting was to demand:’That the Government shall appoint without delay a Royal Commission to make a full investigation as to the identity, or identities, of that treacherous influence in our midst know as the “Unseen Hand”. Further, that the Government shall at once dispense with the services, for the period of the War, of all Officials in the Foreign Office, who have married German subjects, or who have any German connections’.
The apotheosis of this outpouring of suspicion and paranoia, came in the following May, during the infamous libel trial brought by the well-known ‘barefoot’ dancer Maud Allan, against the right wing MP Noel Pemberton Billing - a close associate of one of the speakers at the Cannon Street Hotel, Arnold White. An extraordinary trial which gripped the nation for some six days, Allan was implicitly accused of homosexuality, being rumoured to have had a relationship with Margot Asquith, whilst at the same time being accused of being a German sympathiser by virtue of having undertaken musical training in Berlin. Her ‘erotic’ dancing performances, as well as her recent private appearance in a performance of Oscar Wilde’s notorious play Salome, led to accusations of sexual perversions and sadism. Billing and his associates effectively sealed her fate, however, by their assertion of the existence of a ‘black book’ in the possession of the Germans, and naming 47,000 English men and women vulnerable to blackmail because of their ‘sexual perversions’. During the trial the names of the former PM Herbert Asquith, Margot Asquith, and even of the presiding judge, Justice Darling, were among those mentioned in the book. The book never materialised, but in a way was all the more powerful by its absence. Upon this mythical book was projected a set of paranoid fears and fantasies, concerning the conduct of the war which were at the time incapable of refutation. The trial appears farcical to the modern eye, shamefully conducted on both sides, and with a huge amount of hysteria and baseless accusations. Nevertheless, the prevailing mood of suspicion held sway, and Billings was found not guilty. Pressure mounted on the government and legislation was passed to close German banks, and large rallies continued to be held throughout the summer calling for increasing internment. see Lucy Bland, Modern Women on Trial, p. 39; the British Library holds various unidentified pamphlets and ephemera.