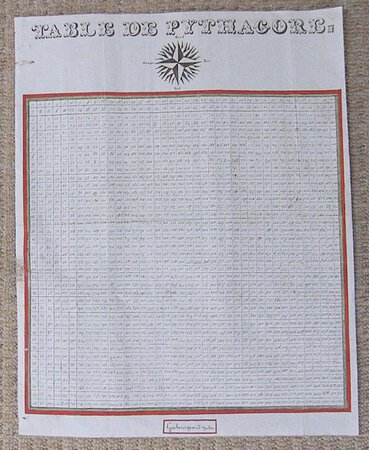 1870. Single sheet, 330 x 425; neat manuscript seemingly in a single hand, mathematical table on recto only within double ruled and hand-coloured border, with attractive and decorative calligraphic title and compass at head, and with contemporary name (presumably that of creator) in manuscript within a red ruled rectangular box at tail; a number of previous horizontal and vertical folds visible, with some slightly staining along left margin, four neat tape repairs to verso, evidence that perhaps once folded and mounted within a bound volume perhaps. A rare survivor, and most appealing example of this famous educational aid - a multiplication table or ‘table of Pythagorus’. Attributed to the ancient Greek mathematician, the table appears to have been first brought to public attention by the Greco-Roman mathematician Nichomachus in his first century work ‘Introduction to Arithmetic’ (Introducio arithmeticae), though earlier Greek and Babylonian examples exist on wax tablets. This striking example in manuscript appears to be the work of Jules Guibourgeaud, presumably a teacher, and no doubt for use in a classroom.