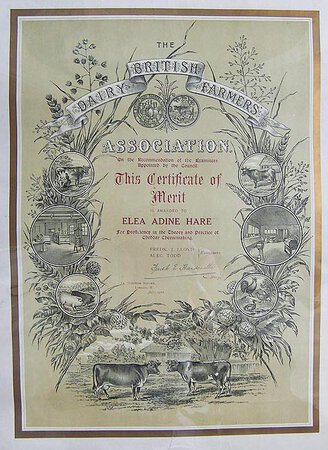 ATTRACTIVE CHROMOLITHOGRAPH CERTIFICATE OF MERIT awarded to Elea Adine Hare by the British Dairy Farmers’ Association ‘For Proficiency in the Theory and Practice of Cheddar Cheesemaking’ and ‘on the recommendation of the examiners appointed by the Council’. Signed, we believe in manuscript, by the Secretary ‘Fredik [sic Frederick] E Hardcastle’. 12. Hanover Square, London, W.

1911. Large folio broadside, 615 x 505mm, pictorial chromolithograph surround and red letterpress, surrounded by gilt border, with larger 95mm tear at tail just touching gilt border, and with further small nicks and tears along upper and right margin; A most attractively printed certificate of merit, evoking images of a bygone era pre WWI when traditional rural skills still held sway. Presented to Elea Adine Hare, this large certificate of merit recognises her ‘Proficiency in the Theory and Practice of Cheddar Cheesemaking’, and was awarded in 1911 after examination. Printed in red letterpress, the text is surrounded by a series of appealing vignettes in lithograph depicting various scenes of farming life.
According a family genealogy found online, Elea Adine Hare (1894-1926) was born in 1894 in Saffron Walden, Essex. The tranquil life that she enjoyed as evoked by the certificate was soon to be altered dramatically, as she subsequently served as a Red Cross nurse during WWI. After the war she was employed by the Essex County Council as a milk recorder, but was fatally injured in some sort of accident near a street corner, probably after being struck by a car. She subsequently died on Aug. 14, 1926 at the hospital in Saffron Walden.

Condition: nevertheless a most striking example.