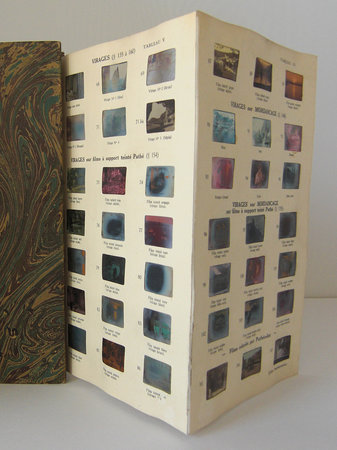 1926. 8vo, pp. xii, 155, [1] blank, with an initial blank; title-page printed in red and orange, text printed on a pale yellow ground; with numerous photographic illustrations and diagrams in the text, and six tables on three folding card mounts with a total 107 small samples of developed film (some slight oxidation to a number of examples, but overall in good condition); small tear at tail of p. 100 & 105, with some soiling to outer margin of p. 60, and some light marginal browning throughout; a good copy in contemporary quarter maroon morocco and marbled boards, spine ruled and lettered in gilt, tail of spine slightly nicked with minor loss, with small hole at tail of lower joint, extremities a little rubbed and bumped. First edition of this important primary source book in the history of early cinema and film production. Published by Pathé, this extensive technical manual on the development of Pathé film for motion pictures was one of a small number of such manuals published during the 1920s by the leading producers of film stock, and contains not only technical information on the colouring systems used at the time by the motion picture industry, but is notable for including sets of illustrations made of actual pieces of original nitrate film. ‘These books, together with a handful of other primary sources, constitute the basis of our knowledge of a relatively neglected topic in the study of early cinema: the effects achieved by colouring film stock’ (Paolo Chechi Usai, 'The Color of Nitrate' p. 22, in Richard Abel, ed., Silent Film, 1996).
Four basic methods of producing coloured films existed before the introduction of technicolour. These were: hand colouring (the earliest and most basic), stencil-colouring (pathécolor was a refined version), tinting (staining the film uniformly) and toning (redeveloping in a chemical bath to tint the darker, developed portions of the film only). All are illustrated here, as is the combined use of tinting and toning; 'only a relatively small section of the Pathé text deals with film coloring, but the three foldout cardboard tables of illustrations with 107 individual nitrate frames are the most complete ever published' (Paolo Chechi Usai, 'The Color of Nitrate' in Richard Abel, ed., Silent Film, 1996). Samples show the influence of under- and over-exposure; the effect of temperature on development; films with a coloured base and/or chemically toned; mordanting (for intensification); pathécolor, etc. Also included are samples of the 9.5mm home-cinema film introduced by Pathé in 1922 as Pathé-Baby. The text includes details on the use of Pathé machinery and the chemical recipes for development.