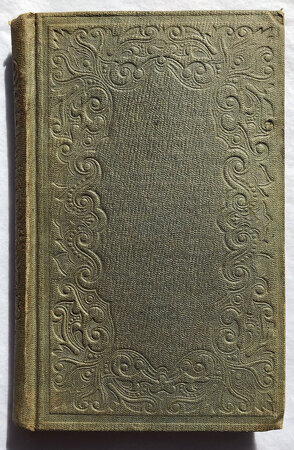 EVERY-DAY WONDERS ILLUSTRATED; or, Facts in physiology which all should know. Philadelphia: American Sunday-School Union, ... New York ... Boston ... Louisville ... [Entered according to Act of Congress in the year 1853, by the American Sunday School Union, in the Clerk’s Office of the District Court of the Eastern District of Pennsylvania].

1853. 12mo, pp. 188; with 42 small text engravings, and engraved tail-pieces; lightly browned and foxed throughout; without the final free endpaper; with library stamp of the ‘Sunday School of Olney St Church, Providence, R.I.’ on title-page and sporadically throughout; contemporary inscription on front free endpaper; Uncommon second expanded American edition (first American, 1851 as ‘Every-day wonders; or facts in physiology’), of this appealing work for children, which, although anonymous, we believe to be the work of the English authoress, Anne Bullar (1813-1856).
According to Atwater the first American edition was published in Boston in 1851 by Phillips, Sampson & Co., and was a reprint from the London 1850. We believe that that 1850 edition was one of a number of instructional works for children written anonymously by Bullar and published by John van Voorst. A publisher’s advertisement for Voorst found in Paley’s 1858 second edition of ‘A Manual of Gothic Mouldings’, ascribes the work to her, together with ‘Domestic Scenes in Greenland and Iceland’ (1844), ‘England before the Norman Conquest’ (1851), and ‘Sunday Book for the Young’ (1855) - none of which are ascribed to her by either OCLC or COPAC. The preface to the present work is almost identical to that of the 1850 work, although a paragraph has been added at the end to say that ‘nearly one-third of the matter of the present edition of this popular volume has been contributed by a distinguished member of the medical profession in the United States, and the whole work has been carefully revised for permanent usefulness’. Three chapters have been added, but by and large the work is largely the same.
It proved popular, and a third edition was published in England in 1862, though under the variant title ‘Every-day wonders of bodily life’ and now ascribed to Bullar. Aside from the Voorst advertisement, we have so far found no other source acknowledging her role as author for the work. Atwater 1095 (first American edition of 1851); copies located at the Library Company of Philadelphia, Harvard, Yale, Rochester, UCSF, Oklahoma, and Houston.

Condition: original green blindstamped publisher’s cloth, spine tooled and lettered in gilt (though somewhat faded), head of spine a little nicked and worn, spine sunned, covers a little faded and with light wear and bumping to extremities; a good copy.