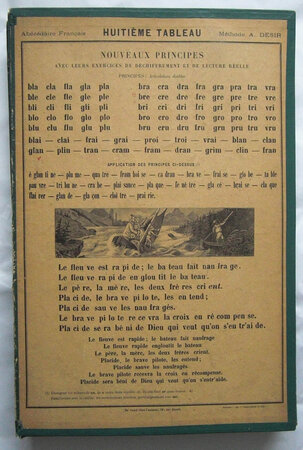 1873.]. Set of ten large, thick card tablets, 480 x 320 x 5mm; each with mounted printed sheet, with engraved vignette either at head or centrally, sheets all a little browned with some staining, soiling and scuffing or creasing in places, plain blue paper on verso, boards 1- 7 with the original green mottled paper edging (somewhat chipped and worn), boards 8 & 9 with later green cloth edging, and final board with no edging remaining and exposing the inner board; though extremities all somewhat rubbed, worn and a little dog-eared, otherwise a striking and rare survivor of an ephemeral teaching aid. A wonderfully striking and extremely scarce set of this didactic French ‘ABC’. The ‘Cours Désir’ was a private quasi-religious Catholic educational establishment set up by the Adeline Désir (1819-1875) in 1853. In particular it welcomed girls from the Parisian upper middle class, and its specific aim was to produce ‘cultured women’, with a focus upon religious education, and the arts, although Désir did place importance upon the role of science in the education of young women. The school took in full-and half boards, as well as some day pupils, from primary stage through to the baccalaureate, and also included a school for the training of women teachers. As the famous alumnus, Simone de Beauvoir, recounted in her ‘Memoirs of a Young Girl’, the school took care to distinguish itself from similar secular establishments, with the young girls enlisted into a ‘Eucharistic crusade’ as soon as they arrived. The number of hours of teaching a week did not exceed 12, and annual retreats were an important part of the school calendar. Students of the school were instantly recognisable by the manner of their bow: ‘un coup de pied droit en arrière avec un léger fléchissement de la jambe gauche’.
The series of ten printed teaching aids, introduce the young child to the basic principles of the ‘Abécdaire français’, through a series of engraved images with accompanying moralistic printed text or verse, starting with the nativity, the farm, ‘Creator God’, a nest, the tale of the ‘Good little Marie’, ‘the two Ceciles’, the good brother, and the Innocent Saints, together with the remaining two boards giving an overview of the linguistic principles so far introduced.

Bibliography: See Butsch, Une éducatrice d’avant-garde, Adeline Désir 1819-1875, 1956; OCLC locates only a set of the first six boards at the BnF, and which have a variant imprint of "Paris imp. A. Dutemple" as opposed to "Bourges, Imp. Ve Tardy-Pigelet and son".