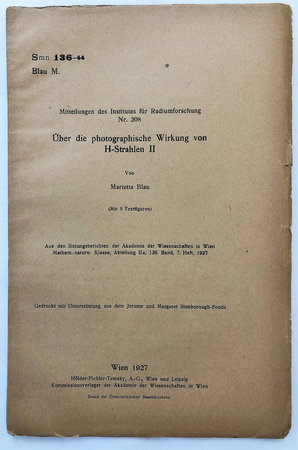 1927. 8vo, pp. 469-480; with five text illustrations and halftones; paper a little soiled and browned; in the original orange printed wrappers, slightly soiled, fore-edge nicked and a little furled and frayed. Offprint of this important paper by the Austrian/US physicist Marietta Blau (1894-1970), published during her time as an unpaid researcher at the Institute of Radium Research, Vienna (1923-1938), a follow up to ‘Über die photographische Wirkung natürlicher H-Strahlen’ (1925) and outlining her pioneering work on the development of the photographic method of detecting and observing nuclear particles and reactions, a method which was to play a prominent role in nuclear physics in the following decades. Considered extraordinarily gifted by Albert Einstein, Blau was nominated three times for the Nobel prize in physics, twice by Erwin Schrodinger. ‘Blau began to explore the possibility of finding protons and smashed atoms using photographic emulsions. Finally, in 1925, she succeeded in detecting the fragments of atoms hit by alpha particles, including the thinner, harder-to-find tracks of protons. These experiments were followed in 1926 and 1927 by a series of experiments in which Blau bombarded aluminium with alpha particles in order to measure the nuclear fragments that would emerge. Unfortunately, with a week radioactive source (the only kind available to her), she had to settle for the very lowest energy particles. It was clear that is she was going to make fast protons visible (as opposed to the much more heavily ionizing nuclear fragments or slow-moving protons), she would have to improve both the emulsion and the development process that would bring out the narrow tracks’ (Galison, Image and Logic: A Material Culture of Microphysics, p. 150).
Blau received her Ph.D. in 1919 with a thesis on ray physics and the absorption of gamma rays. Following her doctorate she moved to Berlin in 1921, taking a position with a company that manufactured X-ray tubes. This was followed by a position at the Institute for Medical Physics at the University of Frankfurt where she worked and published papers on X-ray physics. ‘Blau’s sex and her Jewish background impeded her professional advancement in Austria... When the Nazis annexed Austria in 1938, Blau, who was out of the country at the time, did not return. She worked briefly in Oslo at the invitation of her friend Ellen Gleditsch, then relocated to Mexico City. In 1944 Blau moved to New York, where she worked on radioactivity and took out several patents. She then did research at Columbia University and at Brookhaven National Laboratory. Afterward she took a position at the University of Miami’. Due to the brevity of her employment in the United States, Blau’s retirement income was very low. In order to economize on expenses, she returned to Austria for an eye operation. Poor health caused in part by radiation exposure prevented her from returning to the United States, and she died impoverished in Vienna’ (Ogilvie I, 143).