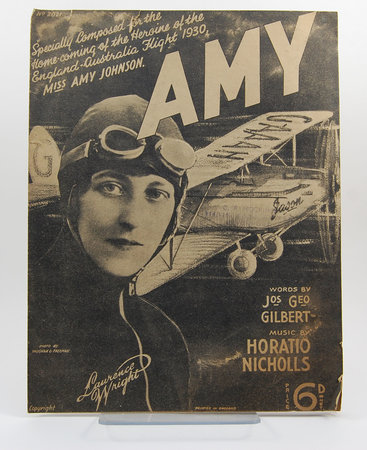 1930. Single folded sheet, large 4to, pp. [4]; music score on pp. 2-3, with vertical column of advertisement down central fold; paper somewhat browned and soiled; advertisement on p. [4]; with photographic depiction of the aviator with her plane on upper cover, front lower corner folded over and with a tiny nick, small tear at the top edge without loss, very faint retailer’s stamp on the front cover. An appealing ephemeral item: an arrangement ‘for “Banjulele” Banjo and Ukele’ of a song written by Gilbert and Nicholls commemorating the ‘daring deeds’ of Amy Johnson (1903-1941).
Born in Kingston upon Hull, Johnson graduated from Sheffield University with a degree in Economics, before moving to London where she trained at the London Aeroplane Club and obtained her pilot’s licence in 1929. The following year she undertook the first woman’s solo flight from England to Australia in the second-hand de Havilland ‘Gypsy Moth’ that she bought with funds from her father and Lord Wakefield. She named it ‘Jason’ after the trademark of her father’s business, and the celebrated plane is featured prominently on the front cover of this song sheet. She flew from Croydon Airport on May 5th., and arrived at Darwin, Northern Territory on May 24th. The aeroplane is now in the Science Museum.
Whilst celebrating her considerable achievements, the song can by no means be considered to be a classic of lyricism and musicality, and the verses jar somewhat with modern sensibilities. ‘You deserve a lot of credit for your daring deeds ... You are just the kind of person that the country needs ... Yesterday you were a non-entity, Now your name will go down to posterity, Amy, wonderful Amy, how can you blame me for loving you?’
In 1940 Amy Johnson joined the Air Transport Auxiliary and in January 1941, in poor weather conditions, had to bail out whilst on a ferrying mission, over the Thames. Her parachute was spotted by the ferry HMS Haslemere, whose commander, Walter Fletcher, dived in to rescue her but both died and Amy Johnson’s body was never recovered. In 1999, a member of an anti-aircraft crew claimed that they had shot down the plane as Johnson had failed to give the correct identification code. To further compound the enigma, there have been claims that a third, unidentified, person died in the accident. He had been a passenger on the plane but as the reason for the flight is still covered by the secrecy laws, this remains unverified.