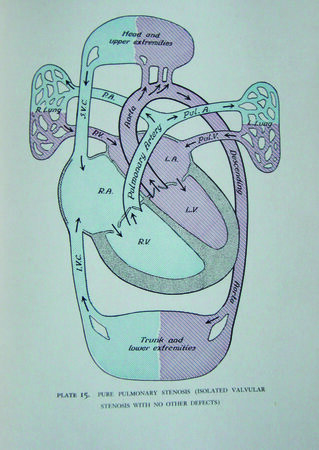 1947. Large 8vo, pp. xxxvi, 618; copiously illustrated without, with 177 text figures and half tones (including 3 full page coloured figures 142, 148 and 149 on two leaves), and coloured plates numbered 1-46 on 36 leaves; generally clean and crisp, with slight kink in upper margins of pp. 491-516; in the original grey publisher’s cloth, spine ruled and lettered in black and gilt, head and tail of spine lightly worn, joints, surfaces and extremities lightly scuffed, rubbed and bumped. First edition of this landmark work, considered to be the foundation for pediatric cardiology, and for which the author received the 1954 Albert Lasker Award for outstanding contribution to medicine. Describing the diagnosis and cure of innumerable congenital malformations, the book had an immediate and vast influence on pediatric cardiology worldwide. Helen Brooke Taussig (1898-1986) ‘conceived the idea of anastomosing the subclavian artery to the pulmonary circulation to improve the blood supply of the lungs; the operation was carried out by Alfred Blalock in 1944, and is now know as the Blalock-Taussig operation’ (Bedford, 821).
‘As a pediatric cardiologist, she carefully observed her patients, listened to their hearts, studied their x-rays and fluoroscopies and, when they died, examined their hearts at autopsy. Her precise records and correlation of observations made possible accurate diagnosis and understanding of pathological cardiac physiology resulting from congenital malformations. Her studies led her to design an operation to solve a problem of post-birth anoxia, the Blalock-Taussig procedure, known as “the blue baby operation” that has saved countless infants from death’ (Grolier, p. 141)
‘To arrive at her great achievements, Helen Taussig had much to overcome - the early death of her mother, dyslexia, severe hearing impairment and the discrimination of much of the medical establishment’ (ibid). The daughter of Frank W. Taussig, the eminent Harvard professor of economics, Helen overcame severe dyslexia to matriculate as one of the first students in which is now Radcliffe College ‘but seeking broader social and educational experience, she transferred to the University of Berkeley, California and graduated in 1921. Determined to study medicine, she was forced, like so many others, to travel the long way round to fulfil her goal... Since Harvard Medical School would not accept a women (first doing so only in 1945) she applied to Harvard School of Public Health, which allowed her to attend classes but would not award her a degree. She was also allowed to study histology at the Harvard Medical School but with a caveat: she was kept in a room by herself so as ‘to not contaminate’ the male students. She finally found a sympathetic mentor in Alexander Begg, professor of anatomy at Boston University, who led her to study isolated heart muscle contractions. This resulted in her first publication and set the stage for her life’s work in cardiology... Even with her major publication, Harvard Medical School would not permit her to matriculate, so she applied to The Johns Hopkins School of Medicine, admitted as a function of the legacy of Mary Elizabeth Garrett and the Women’s Fund Committee that stipulated that women be accepted on the same terms as men, and she graduated from Hopkins in 1927’ (ibid).
In 1959 she became Hopkins’ first woman full professor in clinical medicine. She was awarded the Presidential Medal of Freedom by President Lyndon Johnson in 1964, and was elected the first female president of the American Heart Association in 1965. It was Taussig who was instrumental in recognising the link between thalidomide and the rise in cases of congenital malformations, and helped to end its use in the US. She died in a car accident in 1986.