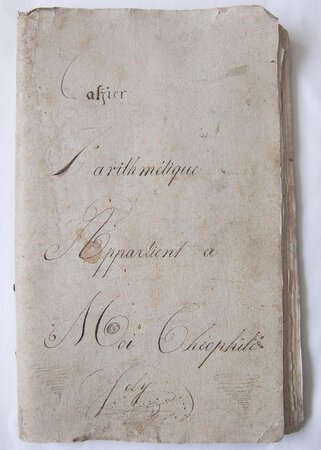 1851. Large Folio, 450 x 295mm, bound manuscript in a single calligraphic hand in a variety of colours, ff. 158; with watercolour illustration mounted on front paste-down (presumably a self portrait of Joly in local Saintongeois costume), with numerous section headings stencilled in black and block lettering (a number misspelt and with corrections), the first leaf heading surrounded by ornate garland in green, brown and ochre, with the copious calculations throughout embellished with underlining in green, brown or ochre; with neat pen illustrations depicting a number of instruments on ff. 113; lightly foxed and soiled throughout, with a few ink smudges, one or two minor marginal nicks and losses but nothing significant, very small square excised at tail of final leaf, presumably a correction?; seemingly self-bound and stitched in contemporary paste-paper card wrappers, with title in manuscript on upper cover, evidence of previous tear on upper cover neatly repaired, some small loss along spine at stitching points, covers a little soiled with dampstaining at head of rear cover; overall a little dog-eared, but nevertheless charming for its unsophistication. A charming, unsophisticated, and one of the most substantial manuscript exercise books we have handled, and the work of the young student Théophile Joly, from Lonzac, a commune of Haute Saintonge in the Southwestern department of Charente-Maritime.
Joly’s notebook is an appealing example of a cyphering book, i.e. a manuscript written either by a student or teacher and with a particular focus upon mathematical content. Printed books were rarely used, and teachers would compile manuscript sum books to be used as teaching aids, and from which the students copied, often embellished with calligraphic headings and flourishes, ink and wash sketches and diagrams, etc. The content often followed a prescribed pattern, containing rules, cases, problems, and solutions to exercises associated with a well-defined progression of mathematical (usually arithmetic) topics.
The present example very much follows this traditional format, though Joly refrains from overly embellishing his course-work - perhaps being of a less artistic temperament, or perhaps reflecting a more rigourous approach to learning instilled by his tutor. His headings are seemingly stencilled in black block lettering - several of which have been misspelt and which have then been corrected. Clearly worked quite hard, the volume contains very few introductions to the arithmetical processes under discussion, but instead is focused almost entirely upon the problems to be solved together with the calculations. Few illustrations are included, although one or two small diagrams are to be found, but a full page illustrations depicting ‘les instruments de la géometrie’ is found on ff. 113. Perhaps compiled in preparation for a trade or mercantile apprenticeship, the arithmetic processes and examples are derived from, or relate to, various professions, including banking, land surveying, brewing, notaries, and as such throws a fascinating light upon contemporary educational priorities of the time.
Joly has clearly given way to a few moments of light-relief however. An appealing water-colour depiction of a young man in local costume has been pasted onto the inside front cover - and which may well be a self-portrait. Furthermore, in a moment of boredom perhaps, at the tail of ff. 22 we find what appear to be five ‘brass rubbings’ depicting the faces of a 2 and 5 franc coin, and which are dated 1838 and 1839. He frequently signs his name throughout the work as well. Seemingly also self-bound, though perhaps a less sophisticated example than some previously handled, Joly’s notebook is in many ways all the more charming for this ‘home-made’ feel!