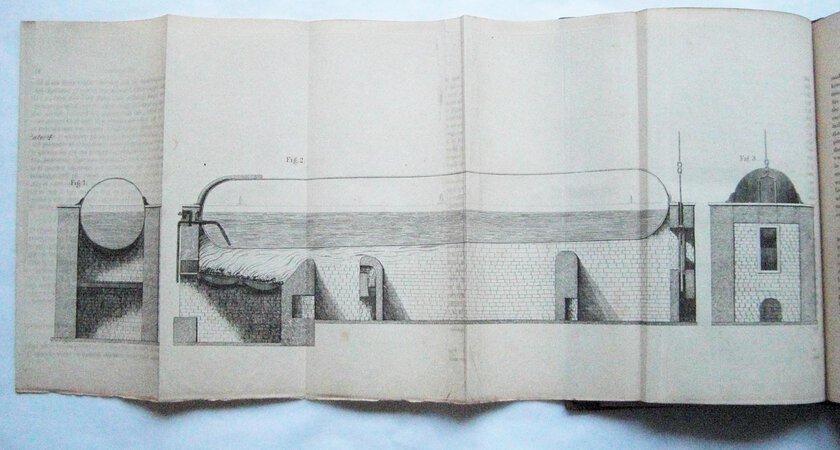 < >
In response to the rapid industrial advances in Manchester
[ENGINEERING.] ARMSTRONG, Robert.

[1838.]. 8vo, pp. [iv], 102; with four large folding lithograph plates; lightly foxed and browned throughout due to paper quality, with some further occasional minor soiling, minor ink staining on verso of first plate, with other three plates a little creased and with evidence of previous folds; bound in contemporary marbled boards, neatly rebacked and recornered in calf, spine ruled and lettered in ink, with some minor abrasions to surfaces; with presentation inscription from the author to Mr. Fildes at the tail of the dedication leaf; a good copy. Uncommon first edition of this detailed work, based very much on first hand experience, on the design and management of boilers, and the work of the Manchester engineer Robert Armstrong. The work bears testament, therefore, to the many technical and mechanical advances which emanated from the town, thanks to the rapid growth of the cotton industry which had transformed Manchester from being a small market town with a popular of 10,000 at the turn of the century, to becoming Britain’s second city by the 1840s, and home to nearly 400,000.
Indeed Armstrong dedicates his work to the ‘Cotton Manufacturers and other Proprietors of Steam engines, in Manchester and its vicinity, who have afforded him many opportunities of obtaining a variety of information on practical details’. This first edition is printed on rather cheap paper, the four large folding plates containing somewhat crude illustrations done reproduced from his original drawings in lithograph, a fact which Armstrong rather ruefully acknowledges in his concluding remarks, his publisher clearly having had little faith in its sale and suggesting only a limited initial print run ‘to meet a merely local sale’. Whilst he prides himself upon his boiler-making workmanship, his limited budget had not allowed him to use skilled engravers and printers, when it came to his bookmaking. An interesting commentary, perhaps, upon how lithography was considered to be a less skilled profession.
The poor design and management of boilers was frequently the Achilles heel of the steam engine, preventing their efficient and economic running. Armstrong focuses in particular upon boilers for mill engines, though there is a small section describing locomotive boilers. He deals with high and low pressure boilers, form and proportions, the capacity of the steam chamber and what happens when the boiler is too small, together with rules for alteration and improvement. There is advice on re-setting boilers in order to save fuel, methods of estimating power, the best form of fire-grate, boiler cleansing machinery and ways to get rid of scale and boiler balls, which clogged up pipes and flues, and on the cause and prevention of explosions. Various types of boiler, such as the Boulton and Watt boiler or Durham and Cornish boilers are referred to and some leading contemporary books, such as Tredgold and Pambour, are cited. A practical and thorough work.