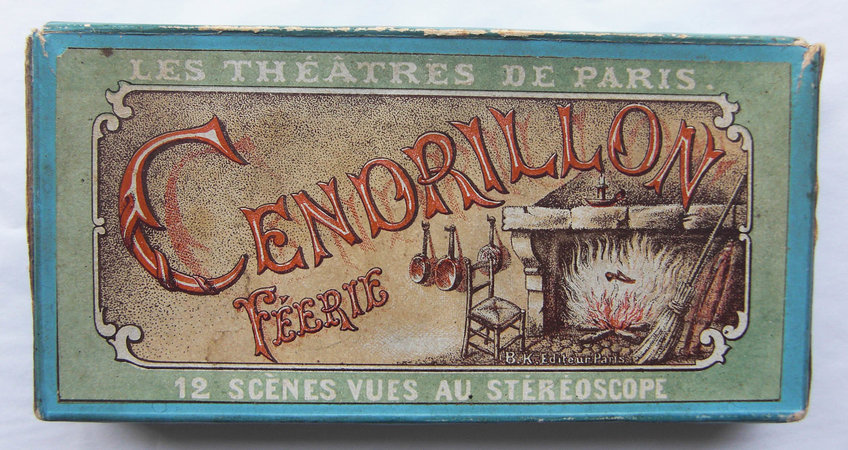 1889.]. Boxed set containing 12 albumen print stereographs, backed with hand-coloured paper sheets, creating a transparency effect, each paired image set within a thick card frames, laid down with ornately decorated pink glazed paper; a number of cards perforated with pin-pricks to allow for lighting effects, one set with more prominent deliberate tissue excision; housed within the original blue card box with wallet lid, with chromolithograph label mounted on upper cover, extremities lightly rubbed and worn; box a little delicate, but otherwise very good. A rare and most attractive set, retaining the original printed box, of this stereoscopic adaptation of Cinderella. A fine example of tissue stereographs, or French Tissues as they were more commonly known, this technique was a creative twist on the more typical albumen stereoviews, and became a popular novelty during the late 1850s and which draw inspiration from the transparency tricks of earlier peep shows.
The set consists of 12 stereo-albumen prints (of paired images) taken from a wet collodian negative. The verso of each photograph has been delicately enhanced with a thin layer of hand-coloured tissue sheets, with a further thin layer of tissue then laid down to control the backlighting, and thus creating drama and depth of field. When viewed without a light source, the images appear flat and uninteresting, but once placed in front of a light they create atmospheric and enchanting scenes. As was typical of the genre, the thick card frame is elaborately decorated, and printed with the series title, and the name of the publisher, in this case B. K. of Paris - who produced a number of such works. Additional lighting effects could be created with the addition of pin-holes, and indeed one card in the present set has had some of the tissue neatly excised to create a beam of light, with others including pin-pricks.
The present most appealing example is part of the collection series ‘Les Théatres de Paris’, and presents a theatrical production of the famous fairy-story ‘Cinderella’, very much in vogue during the 19th century, and which formed the basis for a number of ballets, operas, and theatrical productions. We believe these photographs to be drawn from the 1866 production ‘ Cendrillon ou la Pantoufle merveilleuse, grande féerie en cinq actes et trente tableaux par MM. Clairville, Albert Monnier et Ernest Blum, musique nouvelle de M.Victor Chéri’, and performed at the Théâtre impérial du Châtelet.
The publisher ‘B.K.’ is in fact the photographer Adolphe Block (1829-1918), actor, studio photographer, and publisher, who from 1863 became known for his stereoscopic views. The inside lid of the box retains a printed catalogue, though somewhat scratched and partially erased, which lists other sets available for purchase, and includes reference to a set of views of the 1889 exhibition, which suggests this to be a later issue of the set.

Bibliography: One set located at Harvard, which may be earlier, with variant title ‘Cendrillon Féerie du Théâtres Impérial du Châtelet’.