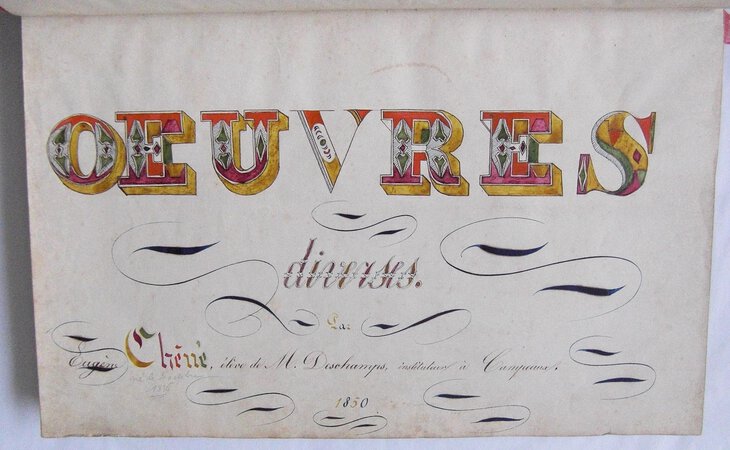 1850. Folio, bound manuscript in a single calligraphic hand in a variety of colours; pp. [iv] half-title with calligraphic flourish and title-page penned in landscape and elaborately hand-coloured, 1-190, 191 part title ‘Actes Divers’ elaborately and colourfully penned in landscape, 192 blank, 193-252, 253 part title ‘Procès verbaux’ elaborately and colourfully penned in landscape, 254 blank, 255-290, 291 part title ‘Actes Civils’ elaborately and colourfully penned in landscape, 292-323, 324 blank, [4] blank; with a number of small neat line illustrations and diagrams; text in a single hand predominantly in brown ink, ornately embellished with colourful calligraphic headlines and flourishes in light green, golden yellow, various shades of blue, pink, red, orange, purple and brown; some light marginal browning and foxing throughout, with some ink bleed through due to liberal application, half title slightly creased; retaining remains of original pink silk page marker; in contemporary calf backed green marbled boards, spine lightly scuffed and rubbed, covers a little scratched, extremities lightly rubbed; a most attractive example. A most attractively executed calligraphy exercise book, the work of Eugène Chênè (born we are told in Campeaux in 1836), and a student of M. Deschamps, a teacher in Campeaux, the French commune located in the department of Calvados. The striking title-page sets the tone, Eugène elegantly and colourfully penning the title in landscape, and employing a number of calligraphic styles for the lettering. We believe his instructor to be a M. Pierre Deschamps, who between 1846-1865 taught in five towns in Calvados, though according to the biographical record for his son Leon (1849-1927), was forced to leave his post in Champeaux in 1850 having fallen foul of the Catholic authorities in the area.
This extensive manuscript is divided into various sections dealing in turn with the general principles of arithmetic (covering addition, subtraction, division, multiplication, fractions, simple and compound interest etc); geometry, a section highlighting miscellaneous legal documents (receipts, leases etc); a section of templates or ‘procés verbal’ on filing minutes or reports; and concluding with a section on civil acts (registering births, marriages, deaths etc). It would appear that Pierre Deschamps was also acting as an agent for an insurance company, and this may explain his focus upon legal and business matters. From the subject matter of some of the sample templates included, one would imagine that the 14 year old Chênè was being prepared for a legal apprenticeship perhaps, some of the ‘procés verbal’ dealing with how to record the statement of an individual caught ‘en flagrant de lit’, a statement recording a disgrace, and how to report an accident involving a carrier. A most appealing and striking example.